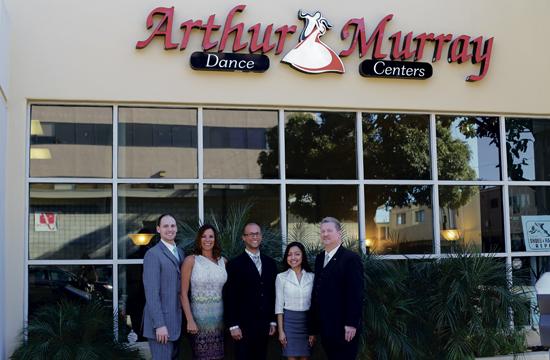 As couples rhythmically twist, turn, and tango to Lorde’s “Royals” blasting as background music, an unexpected marriage between modern pop music and classic partner dance is created every time a lesson is taught within the walls of Santa Monica’s newly opened Arthur Murray Dance Center.

Located at 928 Broadway, this franchise is one of more than 200 Arthur Murray Dance Centers around the world.

The friendly faces that greet incoming customers at the front desk are those who have danced with the company for decades on decades. Dressed in professional attire and emitting nothing but positive energy, it is obvious that owners David Woodbury, Gabriela Young, and Joel Rieck are all accomplished legacies of the dance franchise.

Mayor O’Connor, alongside a handful of Santa Monica Chamber of Commerce members, celebrated the grand opening of the dance studio with the owners and instructors.

As the celebration was held among a smaller crowd, it was easy to realize the kind of intimate, personal connection the owners shared with the Arthur Murray franchise as well as the art of dance.

Eager to provide an example of the genres of dance that the studio teaches, Young not only verbally answered that the studio focuses on all partner dances, but also was willing to share through their favorite medium of communication as well.

Coupling up with the other owners and instructors as well as the Santa Monica Chamber members, Woodbury, Young, and Rieck took to the spacious dance floor, proved the high prestige and talent that the dance center has to offer, and celebrated a new dance studio to add on to their impressive list of locations worldwide.

The owners carry with them impressive resumes: Woodbury and Young, both Certified Examiners, are also qualified to judge international dance competitions.

Young’s extensive experience also qualifies her to construct curricula and syllabi for dance companies. And with Rieck currently pursuing his examiner’s certificate as well, there is no question that the students at Arthur Murray Dance Center are in good hands, to say the least.

Every Tuesday night, a Newcomer Practice Party is offered to those who may not be as experienced with certain genres of dance. Both group lessons and private one-on-one lessons are offered. The dance center also provides wedding programs, which are exclusively aimed at engaged couples preparing for their first dance.

Arthur Murray International, Inc. stands as the second oldest franchise in the United States, with locations in Canada, Europe, the Middle East, East Asia, South Africa, and Australia. Arthur Murray was a pioneer in recognizing the growing prevalence and popularity of Latin dances in America during the 1950s.

The new Santa Monica dance center is located on 928 Broadway, with designated free parking spots in the underground garage adjacent to the dance studio. The Arthur Murray Dance Center is open from 1 pm to 10 pm Mondays through Fridays.