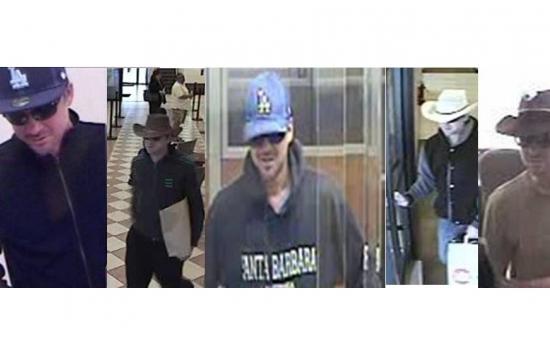 Authorities are seeking the public’s assistance to help them catch a suspect given the moniker of “Westside Gun & Bag Bandit” who has robbed eight banks since last May, six taking place within Santa Monica city limits.

During the eight robberies linked to this individual, the suspect wears sunglasses and a hat, alternating between baseball cap and a cowboy hat.

The suspect threatens a weapon and carries a brown paper bag in which he places the stolen cash. He is further described as a white male, between 35-45 years old; between 5’9” and 6”, and between 160-180 lbs.

U.S. Bank is offering a reward of up to $10,000 in exchange for information leading to the arrest and conviction of the person responsible for the robberies linked to the suspect.

The suspect has been linked to the following bank robberies:

Anyone with information about the identity or whereabouts of the suspect is urged to contact their nearest FBI office, sheriff’s or police station, or dial 911.

Anyone wishing to remain anonymous can call “LA Crime Stoppers” by dialing 800-222-TIPS (8477), texting the letters TIPLA plus your tip to CRIMES (274637), or using the website lacrimestoppers.org.