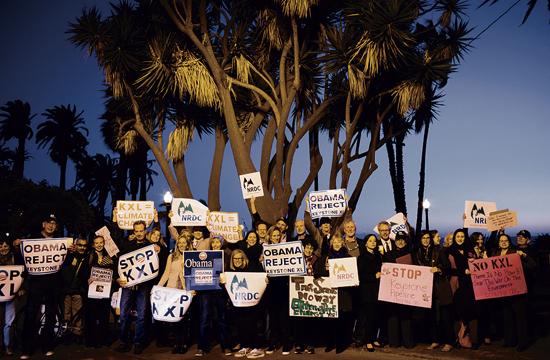 More than 100 people participated in a coordinated rally and candlelight vigil on Monday evening in Santa Monica to protest against the construction of the proposed Keystone XL Pipeline. The proposed project would extend a crude oil pipeline in Canada through North and South Dakota and into Nebraska.

The rally, held at the corner of Santa Monica Boulevard and Ocean Avenue, was part of a larger assembly nationwide organized by 350.org, Natural Resource Defense Council (NRDC), and Sierra Club. In all, there were an estimated 280 rallies across the country Monday, each taking place at 6 pm local time.

Locally, Suzi Orozco, a volunteer activist, coordinated the Monday evening rally. Other organizers involved with the nationwide campaign included CREDO and Rainforest Action Network, among others.

According to those who attended the assembly, the rally lasted about 90 minutes and featured NRDC representatives informing people of the Keystone XL project and why the group is opposed to it.

The rally and candlelight vigil was held this week in light of the U.S. State Department report that fell short of endorsing the Keystone XL project but stated it might be the best option available to deliver crude oil from Canada to Texas. According to an NRDC representative who spoke to The Mirror, President Barack Obama now has 90 days to decide upon the State Department report.

“The purpose was to be highly visible to bolster grass roots pressure on Obama to oppose the Keystone XL Pipeline (which received tacit support from the State Dept) and embrace renewable alternative energies,” said Benjamin Kay, an instructor at Santa Monica College and Samohi. “Basically the State Department backed the oil companies stating in their recent environmental impact report that there wouldn’t be any extra CO2 emissions resulting from the pipeline, which Obama has explained would be a deal breaker. The people at the rally strongly believe the State Dept is inaccurate and likely has ties with big oil.”

Kay added he hoped the vigils would help raise awareness for renewable alternative energies, such as solar, wind, geothermal, and advanced biofuels like algal oil.

Groups such as 350.org, NRDC, and Sierra Club hoped Monday night’s rallies and candlelight vigils would send a message to Pres. Obama to keep the project from going forward.

NRDC Media Program Assistant Dylan Gasperick said the coordinated national response would indicate to Obama he would be held accountable for how he decides to move forward with the proposed project.

“Its not needed,” Gasperick said. “It’s not in the national interest.”

NRDC has a series of plans to reach out to key government officials and political leaders and campaign against the proposed pipeline extension.

Proposed by Calgary-based TransCanada Corp., the pipeline reportedly carries a price tag of $7 billion and would deliver tar sand oils from the Canadian province of Alberta to Nebraska and eventually Texas’ Gulf Coast. According to the State Department report, the proposed pipeline is 875 miles long and would deliver up to 830,000 barrels of oil per day from Western Canada to Steele City, Nebraska.

The State Dept. report did not take an official stance on the pipeline; however, the report did indicate the Keystone Pipeline was the best option available – compared to rail delivery – to deliver oil from Canada.