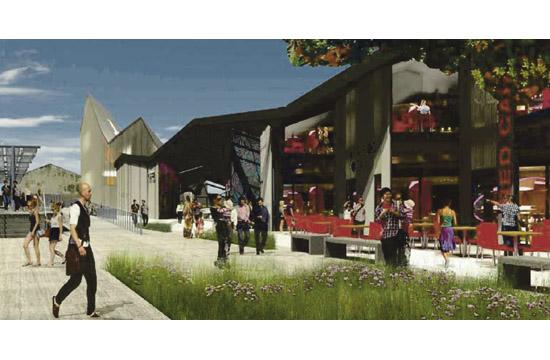 The Santa Monica City Council is not yet done with development in the Bergamot Station area. Just two weeks after formally approving the controversial Hines development agreement (DA) on second reading by a 4-3 vote, council members will be voting this Tuesday, Feb. 25 to allow the City Manager’s office to enter into an exclusive negotiating agreement with a developer to develop the Bergamot Station Arts Center.

If approved, 26Street TOD Partners would begin the process of seeking a DA from City Hall. Since this is one of the first steps on the DA application process, a final vote on the proposed project would not come until at least 2017.

Still, the prospects for a DA at 2525 Michigan Avenue – less than a mile from the just-approved Hines DA, which, once built, could bring as many as 7,000 additional vehicles to the Bergamot Station area – may draw additional ire from some development-weary residents.

So, what does the redevelopment project propose?

According to City staff, the developer proposes a six-story, 93-room hotel and a four-story museum; also proposed is a 200-plus-seat amphitheatre. The proposed Floor-Area Ratio (FAR) is 0.9.

According to City staff, the developer would seek LEED gold-level certification, install rooftop solar units and a rainwater collection and irrigation system, and provide natural lighting and ventilation for tenant spaces.

Two non-profit partners – CalArts and KCRW – are proposed to work alongside the museum and galleries to create arts education and programming.

“The developer will contribute a portion of parking revenues to arts programming, estimated $150,000 per year,” City staff stated.

City staff added the 26Street TOD Partners proposal was the “most exciting, visionary and creative in its approach to realizing a vibrant arts and cultural center” and the project, if realized, “would retain and build upon the success of the current center by retaining art galleries, supporting both emerging and established artists, and expanding the array of cultural offerings on the site.”

The Bergamot Station LTD/Worthe Real Estate Group proposal, according to City staff, did not maximize the synergy of the new transit station and therefore missed the opportunity of taking Bergamot Station Arts Center to a new level of community access, cultural programming, and long-term viability.

With regard to REthink Development/Kor Group’s proposal, City staff stated the evaluation panel questioned the team’s overall experience and ability to deliver a project of this complexity, given that the collective team has not worked together previously.

The 26Street TOD Partners proposal carries the highest price tag at a little more than $92 million. REthink Development/Kor Group’s proposal was priced in at about $81.7 million, while Bergamot Station LTD/Worthe Real Estate Group estimated its project would cost about $80.4 million.