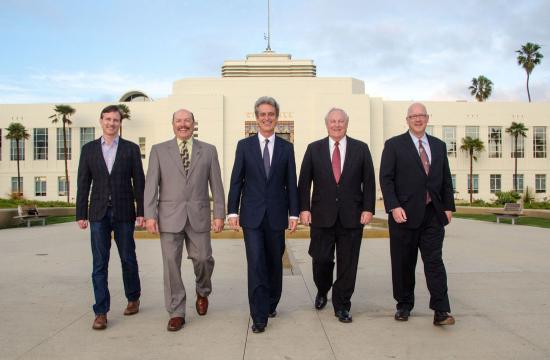 Shriver said he was grateful for their support.

“We have worked together on issues to improve Santa Monica and the lives of its citizens and their families,” Shriver said. “Their support means a great deal to me and I look forward to continuing to work with them and other local elected officials from the Third District as a member of the LA Board of Supervisors.”

Shriver is running for the seat currently held by Zev Yaroslavsky who is being termed out later this year.

The council members each released the following statements regarding their endorsement of Shriver:

Bobby makes things happen for the environment. When he started his first term as councilmember, the ocean water under Santa Monica Pier was the second most polluted in the state. Bobby couldn’t stand the idea that kids were getting sick from swimming there, so he led the campaign to pass Measure V, a parcel tax that each year raises $2.3 million to keep contaminants out of the bay. After the measure passed by 67% in 2006, Bobby followed up with city staff to make sure projects were completed fast. By the time he left office in 2012, all seven of the city’s coastal testing sites earned an A or A+, according to Heal the Bay’s Annual Beach Report Card.

Bobby has worked his whole life to help disenfranchised youth and adults. He is a champion for Santa Monica’s Pico Neighborhood, home of the city’s highest concentration of low-income families. When our community needed a library, he made sure we got it. He is a stalwart supporter of the Pico Youth and Family Center and its important work to provide academic support, job training, and alternatives to gang violence.

When he came into office, Bobby saw homelessness as Santa Monica’s biggest problem. The city had settled into ways of dealing with it that weren’t working. Bobby shook things (and people) up: he studied other cities’ successes and got the council and staff to adopt more effective—and cost-effective—ways to move people into housing. He convened homeless service providers and VA officials to create supportive housing for homeless vets in unused buildings on the West LA VA grounds. Rehabilitation of one of the buildings is well underway.

Land use decisions are arguably the most important ones a City Council can make and certainly they evoke the most passion among voters. When Bobby served on the Santa Monica City Council he displayed a special talent for using his background in law and finance to parse through the rhetoric surrounding project applications and cut to the heart of the decision before him. While respecting the rights of property owners, he always listened carefully to the concerns voiced by residents and did his utmost to protect neighborhoods from traffic and over-development.