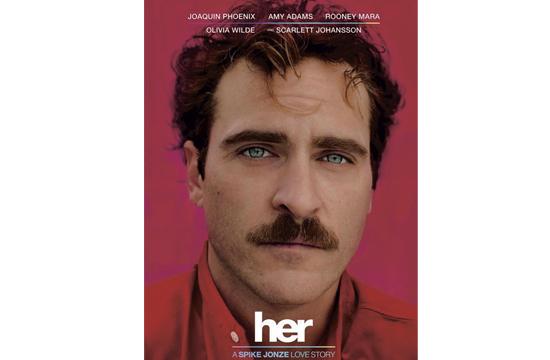 I’ll hope to not inject any spoilers here, but Spike Jonze’s film “Her” is well worth the effort to catch now in theaters for several reasons. I think it can be valuable to feel a theater audience experience the journey of the central character played by Joaquin Phoenix as the story moves forward. And then to overhear reactions as that audience leaves the theater chatting about a film that does a pretty good job of examining that thing we most often call “love.”

“Her” is set ambiguously in some future time. Many reviewers have posited that it’s about 20 years from now, and the film itself has a superb production design that mixes the familiar with elements clearly not yet part of our lives. But this ‘futuristic’ setting may actually be a clever device that causes viewers to recognize how much of the story is about us and the time we live in right now.

In “Her,” Phoenix’s character Theodore Twombly is shown working his job, which is to pour his real emotions into the crafting of personal letters written for “clients” who are unable to say what’s in their hearts by writing the letters themselves. We come to like Twombly by way of the sensitive text he creates, and thus we’re pulling for him to figure out his love life even as the story begins going down its digital path.

Twombly downloads a new operating system for his computer. When the new “OS” introduces itself in a female voice, Twombly and the operating system begin learning about each other and eventually both become convinced they have fallen in love. In the future of “Her,” computer/phones are the size of a stylized cigarette case with a lens for capturing what’s going on around the user, allowing the OS to go everywhere with Twombly and become a companion. Except that unlike contemporary digital social phenomena such as full-grown men developing a crush on a particular porn star, Twombly is open about the relationship with his friends and co-workers. He learns of others having a similar experience and there is no apparent oddness to his going on “dates” with the OS and in more than one way experiencing “sex” with his new lover.

But far from being a science fiction story, watching this romance develop in “Her” takes us through what amounts to a series of questions about what “love” is, what makes it work, and what we want in an intimate relationship. We get plenty of movies representing people in love; there are far fewer examining and questioning the actual pathology of love.

How credible is the premise of “Her”? Who among us, with the possible exception of Governor Chris Christie, does not at some level seek to be loved unconditionally? To be “loved” by your OS would likely mean no unpleasant discussions about your weight or your hair falling out, or whether your career is going well. The OS in “Her” is without a body and never asks Twombly if her software makes her butt look big or is she’s wrong to be having coffee with her buff male yoga instructor. Although deeper into the film, it rocks Twombly when she admits to not being exclusive with him.

As Americans integrate late 20th to 21st century social changes such as the acceptance of several divorces in one’s romantic resume or the time-saving efficacy of looking for partners at online sites promising “the most marriages,” it seems probable that we have a lot of questions about love itself. How good can it get? Are regular arguments the sign of a relationship’s health or trouble? And then there’s the crucible of sexual fidelity, which while long standing as a kind of warranty on love, arguably doesn’t ‘work’ when put alongside statistics based on real behaviors.

“Her” takes us on a date Twombly has with a real woman, one that crumbles when questions related to whether having sex will mean some level of commitment or just capping the evening. That Twombly turns that disaster into a deepening of his relationship with his OS suggests that the tidiness of a relationship without physical dimensions is at least convenient. We already live that way, with our device-driven communications to friends and even lovers that don’t require us to be there… or to touch.  Later in “Her” there’s a clumsy effort to insert a human surrogate and – well, see the film.

Although I’ve just had a major birthday I’m still impressed with the number of my similar age male friends who seem unable to craft lasting relationships with women, or in a nod to our new world of love, let’s just say others. One is tempted to conclude that perhaps not everyone is capable of figuring out how to sustain a long-term relationship, but then I often tell my buddies that everybody deserves love. Maybe that’s just me being supportive, about something that can’t be known or experienced until it’s actually known or experienced. But I stand by that, even if 20 years from now some may ultimately find what they are looking for in a downloadable program.