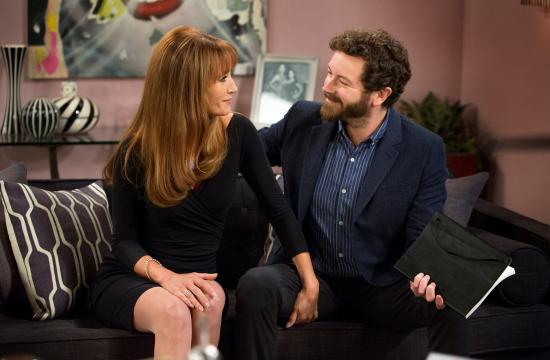 The third season of “Men At Work” on TBS is almost complete, but do not expect it to lose any steam before the March 12 season finale.

Adding some steam of her own to the series, Jane Seymour makes a guest appearance on tonight’s Feb. 12 episode of “Men At Work” as the “naughty” and “wicked” Bridget. In the episode, Seymour’s character does a little role reversal with Milo (Danny Masterson), with the former doing a little seducing of the latter.

The Mirror spoke with Seymour about her character on “Men At Work” (created by Breckin Meyer) and a few other topics.

What was it like for you to work on a primarily male-dominated set of a male-oriented show?

Jane Seymour: It was a lot of fun. They were great guys and it was a really funny episode. Very funny, great role, and the guys were a hoot.

What was it about the show that intrigued you to want to take on the character?

It’s sort of a role reversal. Normally you see the man who seduces the women, to get a woman to be seduced. It was fun, the whole idea of (the person my character seduces) wanting to be a writer and (his) thinking by sleeping with (my character) he was going to have his dream come true and her point out she thought it was just a game.

Did your role on this show come about because of your work with Breckin Meyer on “Franklin & Bash”?

I think so. Breckin asked me if I’d come and do something on his show. He wrote a wonderful, fun character for me, which is quite different than the one I play on his show, and I love doing comedy.

How would you describe your character in “Men At Work”?

I think she’s just playing with this guy because she can. She figures he’s cute and she might as well enjoy it. I didn’t get to do a lot of comedy when I was younger because people didn’t look at me and think I was very funny, so it never occurred to anyone to hire me for comedy. But when I did Wedding Crashers … people said, ‘wow, she’s a comedian.” If they saw my theatre work in England, they’d know I was a comedian, if you watched some of the Doc Quinn episodes there were some funny moments. I love the fact I have this whole other career … and really embracing who I am, at the age I am, and finding humor in all of it. I’m really getting some fun roles.

Do you feel you’re being typecast into the older woman role?

Each role I play is a different kind of character. I’m doing other things, as well, that have nothing to do with this at all. I love the idea that I can play lots of different kinds of roles and that sometimes I can play looking glamorous or younger or sexy or evil or complicated or broken. It’s acting. It’s what I enjoy doing.

What appeals to you the most in working comedy?

I like to laugh! I love good comedy. Coming timing and comedy is one of the hardest things to do, so it keeps me on my toes. It’s really cool when you can make people life and time it correctly. I have a great sense of humor and I love sharing it with people. I think “Men At Work,” I thought that was really funny, it was a fun, great character. Comedy is heightened reality. I like love idea that I can do both … drama and comedy.

Do you still have a lot of people who recognize you from your role as Dr. Quinn?

Oh absolutely. The show probably had more of an impact in other countries than it did in America. It’s nice to know something that positive is a wonderful American export.

Your birthday is coming up this weekend? Any big plans?

You can catch the remaining episodes of the third season of “Men At Work” each Wednesday at 10 pm (9 pm Central) through March 12.