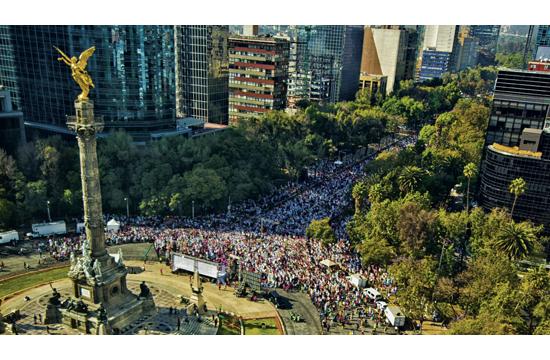 A handful of members from Santa Monica-based Naam Yoga LA traveled to the Mexico City January Ciclotón (bike-athon) for a Naam Yoga super class on Sunday.

Dr. Joseph Michael Levry, founder of Naam Yoga (headquartered in Santa Monica) returned to Mexico for this historic event and set into motion the powerful, healing vibration of Naam Yoga for Mexico City and the world.

According to TV Azteca 15,000 attended this fourth annual event. Estimates from attendees project that numbers were above 21,000. Thousands more from around the world participated through a Livestream broadcast.

Dr. Levry said he was thrilled with the turnout and how much the event had grown in three years.

“It is our responsibility to individually and collectively contribute something positive, healing and uplifting to our planet,” Dr. Levry said. “We came together at the Angel of Independence Monument in Mexico City to unite our hearts in the spirit of healing in order to add more love, more peace and more light to the world.”

“To be one of thousands of people who came together in the name of peace was the experience of a lifetime – thank you Mexico and Dr. Levry,” Mirshak said.

Naam Yoga is a new form of yoga that incorporates sound, movement, and breathing, increasing the flow of energy in the body to achieve optimal health and well being.

This rapidly growing form of yoga is available globally, with franchises in USA, Mexico and six other countries.