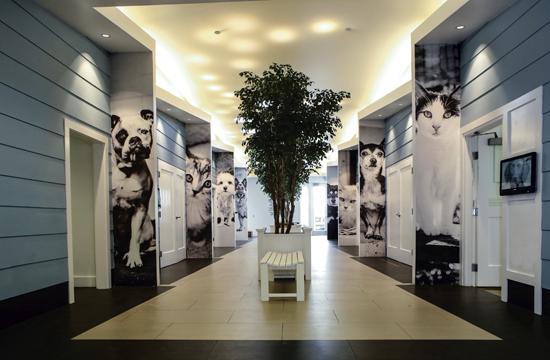 With its modern, inviting facilities as well as its  personalized customer service, No Kill Los Angeles (NKLA) is well on its way to changing the face of traditional pet adoption. NKLA opened its facilities near Santa Monica Boulevard and Sepulveda in West Los Angeles on Aug. 1 of last year.

NKLA is also a coalition that consists of city shelters and 75 animal welfare organizations. Its main mission is to prevent the killing of healthy or treatable animals in shelters and eventually turn LA into a “no-kill” city.

This will be accomplished largely through the extensive spay/neuter services, which will cause fewer animals to go into shelters and adoption rates to increase.

Though it has been but a brief time span since its birth, NKLA has already accomplished some feats. The NKLA initiative was launched in 2012, and within that year, the death rate in LA pet shelters decreased 12 months in a row.

Already, the city’s kill rate has been cut in half, with the 2013 count being 9,000 killed animals as opposed to 17,000 at the beginning of 2012. This is largely due to how NKLA functions: once a pet is adopted, another animal in need is immediately brought to the center to take its place, meaning that the occupancy at NKLA is always full.

The high-tech facilities are very uncharacteristic of a conventional pet adoption center, but after a survey conducted by BFAS that showed that millennials are “turned off” by the idea of pet shelters, NKLA took to a more effective strategy.

The environment makes for an accessible, comfortable, and sanitary adoption process, and appeals much more to the younger generations in particular.

The facilities sport air-flow systems and flat-screen televisions that aid in boosting the modernity of the pet center.

It’s apparent that such unconventional measures were taken in order to meet a drastic need for the prevention of animal killing in shelters.

The pet center is to serve as a model for other pet adoption centers as well. Los Angeles was specifically chosen as a central location for the initiative because of the city’s trend-setting nature.

“We wanted to do something that had never been done before,” said Claudia Perrone, NKLA’s Marketing Specialist.

The quality of pet care is not overshadowed in the least by the center’s swanky aesthetics. All of the pet center’s felines and canines are vaccinated, spayed, and neutered.

NKLA boasts meet-and-greet sessions, which take place in private rooms where potential pet-and-owner pairs have time to grow acquainted with each other before an official adoption. There is also a playroom available for pets and potential owners to partake in activities together.

The animals are housed in “Cat Cottages” or on the “Dog Boardwalk,” which are all named after streets and neighborhoods in Los Angeles to enhance the local appeal.

All pets are given individualized attention, with walking times and meal proportions personally assigned to each cat or dog. The staff consists of about 15-20 members, as well as a crew of volunteers, who all endearingly know every pet by name and personality.

For those who have a heart for pet animals, this new adoption facility is worth the visit. More than 100 ownerless cats and dogs from NKLA Coalition partners are housed at the center.

Adoption kits, which consist of a month of pet insurance, a bag of pet food, and a customized pet ID tag, are available on site. There is also a NKLA boutique conveniently located in the center, which sells other pet necessities in addition to NKLA memorabilia.

Make sure to bring a driver’s license or other valid form of ID. A collar and leash for the pet is also necessary at the time of adoption (you can either bring your own and purchase one at the center).

The NKLA Pet Adoption Center is located at 1845 Pontius Avenue in West Los Angeles. The center is open daily from noon to 8 pm.