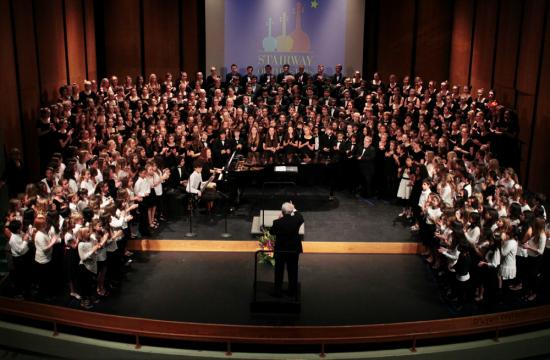 The Santa Monica-Malibu Unified School District will continue its 65th Annual Stairway of Stars concert series this Tuesday and Thursday nights at Barnum Hall on the campus of Santa Monica High School.

The concert series features a total of 26 choirs, bands, and orchestras, many of which include students from all 16 schools that make up the district.

Naturally, these performances will highlight the talents of music students and teachers as well as the quality of the music curriculum.

The evenings, which all begin at 7 pm, opened Friday night night (a choir concert) while a band concert will be held Tuesday and an orchestra concert Thursday.

Dr. McNeil is the Professor Emeritus of Music at the University of California, Davis and the founder of the Albert McNeil Jubilee Singers, a traveling ensemble. Nell Walker and Michael Wright, who are both part of the Jubilee Singers, were guest soloists.