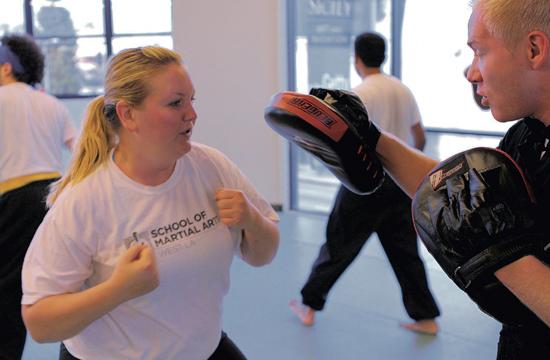 On Saturday, I tried something I had never done before: Kung Fu. I didn’t even know what it was until that day.

I was invited by the owner of The School of Martial Arts (right on the border of Santa Monica on Bundy and Santa Monica Blvd.) to check out a class. He read one of my columns, and thought that Tai Kwan Do would be beneficial to my readers – and me.

I walked in the spacious studio – wood floors with lots of windows and light, accented in dark and light bamboo. Sophisticated, calming, and professional. A Tai Chi class was in session, with a few minutes remaining.

I’ve taken Tai Chi before – it is an ancient Chinese exercise system aimed at improving the health of the body and mind through balancing the body’s energy, or chi. It consists of a series of slow, fluid movements that are more graceful than they are aggressive and is based around a form of martial arts.

The class ended, the studio emptied out, and three strong-looking guys lumbered in, took a small bow and found their places to stand. Then there was me. I too, took a bow before entering the studio, and trotted to the end of the row of guys. Oh s—t, I thought. What did I get myself into?

It turns out that the session was a self-defense class, an adaptation of Kung Fu, designed for adults. Two guys had yellow belts on, one guy had a white belt, and I was wearing a yoga outfit. Stuck out like a sore thumb. But I was game. We started out on our knees, bowing. We then did simple some warm-up exercises. Pretty easy so far.

Then the fun really began. We first worked on some self-defense skills if someone tried to punch you. It was kind of a dance, where steps were slowly, deliberately choreographed. We gracefully stepped out of the way of the punch, and stepped into several self-defense moves – punching the attacker’s throat, poking out his eyes, kicking his groin, and then his kneecaps. I was beginning to really like this!

We also practiced a technique used when someone tries to grab you. First it’s a grab of his wrist with one hand, then using your second hand for more leverage, then bending back his wrist to stop him – cold.

A second iteration of this was someone grabbing you and having a knife. The wrist grab technique is used – then you pivot your foot, tuck his elbow under your arm and “break” his arm – and take the knife from his hand. That was my favorite one. I am going to practice this with my husband, Larry.

We also did some mild grappling on the ground, meaning, if someone is on top of you, there is a way to move your lower body to push him off of you. Could have used this move when I was in my 20s!

Other exercises followed, and the hour flew by. Learned some cool moves and got an amazing work out! After the class I spoke with owner Sifu Ryan Scott, a cute young guy from Michigan, who’s been studying Martial Arts since he was eight years old.

Moving west to get relief from the cold weather, Sifu’s successful studio has been in business for two years. He personally teaches every class. When I asked if this training would be useful to women over 50, he enthusiastically shook his head yes.

Sifu went on to explain that for women 40 and older, this “moving meditation” session provides a safe environment in which to develop a strong body and mind, have better balance, coordination and concentration, as well as learning the art of self-defense. And it’s easy on the body!

I’ll be back. It was fun. After the class, I felt a sense of power and strength. Look out Larry! I’m going to practice on you!

For more information, go to www.schoolofma.com.