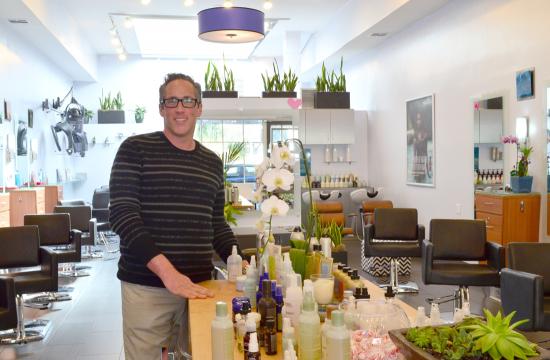 Brightly lit, cleanly kept, and neatly organized, Salon Tru recently opened its doors in December at 614 Santa Monica Boulevard. Although the salon is closed on Mondays, owner Michael Schoenfeld gladly opened the door on a recent Monday afternoon for a peering customer who was unaware of the salon’s hours. He kindly answered some of her questions and concerns about hair care.

With more than 17 years of salon experience and customer service under his belt, it’s safe to say that Schoenfeld is accustomed to going above and beyond the ordinary haircut.

Though this is a fairly new location for Salon Tru, Schoenfeld has owned Salon Tru’s original branch in Scottsdale, Arizona for 11 years. Highly regarded and acclaimed by locals and authorities alike, the Scottsdale location is where Schoenfeld strengthened his skills as a reputable hair stylist.

His roots, however, stem from his childhood.

“I grew up in this industry,” Schoenfeld said.

His first exposure to working at a hair salon began at the age of seven, when his aunt brought him to her hair salon for “Take your child to work day.”

Naturally he was only assigned the mundane tasks, like sweeping hair off the ground – but it was then that he started to become fascinated with the concept of the hair salon and the idea of hair styling as an art form.

He recalls hiding in the bathroom and dying his own hair at the age of 12, as well as experimenting with his younger brother’s hair.

Though he graduated with a bachelor’s degree in textiles and clothing, it was clear from the get-go what his underlying passion was.

Schoenfeld went on to attend beauty school. While he was studying, he got his foot in the door working at the Scottsdale location of Salon Tru, which he would eventually take ownership of.

He said he moved to Los Angeles last year with his husband who had accepted a new job.

After struggling to find a salon job on the Westside, Schoenfeld decided he would just expand Salon Tru and create a second location.

Throughout his career Schoenfeld has fostered lasting relationships with his clients, who, despite the passing years, remain loyal to his services.

He even tries to visit almost annually the owners of a hair salon in Koh Lanta, Thailand, whom he befriended on vacation by teaching them how to perform certain haircuts. Schoenfeld is not unfamiliar to the realm of volunteering, either.

His intentions are pure and clear, as he offers the Thai hair salon a day of service when he visits, and upon moving to Santa Monica, prior to the opening of Salon Tru, Schoenfeld spent some of his time offering to volunteer his services.

Salon Tru consists of 13 stations as well as a two-person dry bar, with the goal of having all assistants on the floor at all times to ensure optimal customer service.

Schoenfeld has, for the most part, retired from the role of hair stylist and acts more as the owner and mentor of the salon.

However, with the current five-star Yelp rating, it’s obvious that Schoenfeld has very successfully guided and instructed his team of stylists. Even though the salon has only been open for a little over two months, it is undeniably climbing the charts and winning over the hearts of the Santa Monica locals – and with legitimate reason.

Salon Tru is located on 614 Santa Monica Boulevard. Its hours are Tuesday through Friday from 9 am to 8 pm, Saturdays from 9 am to 7 pm, and Sundays from noon to 5 pm.