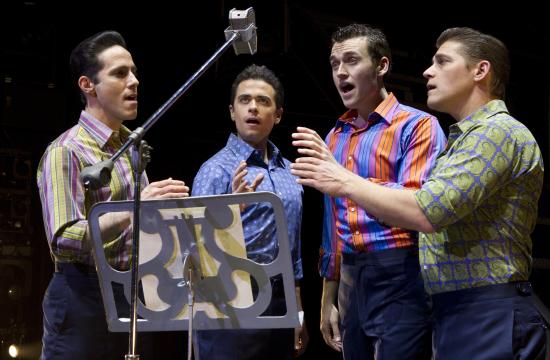 Jersey Boys has entertained guests in Las Vegas for more than 2,000 performances since opening in 2008, and the show has performed at its current home, Paris Las Vegas, since March 2012.

The show is the story of Frankie Valli and The Four Seasons: Frankie Valli, Bob Gaudio, Tommy DeVito, and Nick Massi.

This is the story of how a group of blue-collar boys from the wrong side of the tracks became one of the biggest American pop music sensations of all time. They wrote their own songs, invented their own sounds and sold 175 million records worldwide – all before they were thirty.

The show features hits such as “Sherry,” “Big Girls Don’t Cry,” “Can’t Take My Eyes Off of You,” “Oh, What a Night” and many more.

Nick Massi is played by Santa Monica native Jeff Leibow, who has been with the show since its Las Vegas debut in 2008.

But it wasn’t until he was a junior in college at UC Davis when a friend of his dared him to come with her to auditions for a local production of “A Chorus Line” that he even thought about theater.

“I landed the role of ‘Mark,’ and after that I was hooked,” Leibow said. “I put my oboe away, and traded it for a voice that I didn’t even knew I had until then.”

Leibow said it was a process to be cast to the show. He said he had just returned to California after some time in New York auditioning when a friend told him auditions for a new Las Vegas production of Jersey Boys.

“After connecting with the casting director through a mutual friend, my wife and I were headed to Vegas for the first round of auditions,” he said. “This lead to two months of callbacks in Vegas, Los Angeles and a few in New York including two in front of Frankie Valli and Bob Gaudio.  A couple weeks after the final callback, I got the call.”

When asked what he loved most about being in the show, he said there were many.

“Other than the incredible script I get to dig into every night?” he said. “I love see how Jersey Boys affects the audience.  Some are taken back to their youth, and you can see them remember sitting in their friends car when “Sherry” first hit; some are guys that got dragged to the theater by their spouse and are the first to tear up at the end; and some are discovering this music for the first time.  It is a rare thing as an actor to see such a visceral reaction from the audience.”

As for playing Nick Massi, Leibow said the character was such a departure from him.

“We do have similarities, but not that many,” he said. “So, every night I get to transform into a new person. As an actor, I love the challenge, and even after a couple thousand performances it still keeps me going every night.