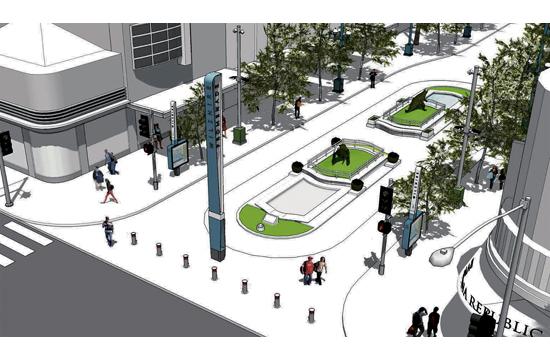 A pilot program to help make it easier for people navigate the Third Street Promenade and to activate the northernmost section of the Santa Monica thoroughfare was approved Jan. 14 by the City Council, though not without a little resistance.

Though a consent calendar item, council member Kevin McKeown pulled the proposed wayfinding pilot program for discussion due to concerns of an incomplete public process.

Particularly, McKeown wanted greater public process to vet a portion of the pilot program proposing a 32-foot pylon at the north end of the Promenade at Wilshire Boulevard to make it conspicuously obvious to people at that intersection they are at the popular thoroughfare.

The one-year pilot program – which was approved by a 6-to-1 vote – would, according to City staff, “install two custom designed and fabricated map cases, and one 32-foot tall way-finding pylon at the north-end of the Third Street Promenade near Wilshire Boulevard.”

Also included in the pilot program are plans for new signs, map directories, news racks and updated light poles City staff stated “would serve as a template for a larger makeover to create a more uniform look for Downtown.”

Yet, McKeown questioned the public process and how informed Santa Monicans were with a proposed pylon essentially three stories in height. While he was okay with moving forward with the other elements of the pilot program, McKeown hoped his colleagues would join him in holding off on the pylon in order to allow the public more time to provide input of its design and size.

The council went forward with approving the one-year pilot program as proposed, with McKeown the sole “no” vote.

“I’m fully in favor of the idea of better wayfinding Downtown and the map cases that are proposed,” McKeown said. “My question and my resistance here has to do with public process on something as highly visible as – and some would think intrusive as – a 32-foot high pylon. That’s a three-story structure.”

Despite the height, proponents of the pylon observed it would be similar in size to a light pole.

“It’s really meant to be a marker for people to understand they are at Third Street Promenade and Wilshire Boulevard. The pylon is really not much bigger than a light pole,” Kathleen Rawson, CEO of Downtown Santa Monica, Inc., told council members, adding it would not be any larger than 24 inches by 24 inches at the base and about two feet taller than light poles along the Promenade.

Rawson also told the council the DTSM board has been “concerned about the northernmost block of the Promenade.” The one-year pilot program could help determine whether the pylon would activate the portion of the Promenade between Wilshire Boulevard and Arizona Avenue.

However, McKeown pondered whether the same activation could be achieved with a shorter pylon or sign.

“I understand the intent here was to help tourists find where Wilshire Boulevard is,” he said. “I think we can do that with less intrusive signage a little closer to ground level.”

McKeown added the pylon proposal was only presented at DTSM meetings – which he observed are generally sparsely attended by the public – and an Architectural Review Board (ARB) meeting.

“There was really no large public outreach on this,” McKeown said, adding the chair of Wilmont Neighborhood Coalition was unaware of the pylon proposal.

Council member Gleam Davis countered by saying DTSM is one of the City’s boards and commissions and the pilot program had been on the its public agendas.

“We do a lot of things without doing full blown public meetings,” Davis said. “There have been public meetings about this, both in the context of one of our well-established boards and commissions as well as the Architectural Review Board. It is a pilot project. No one is proposing a ton of them. My other concern is that if we start … to establish a precedent where everything that’s bigger than a teacup we have to have public process about, we’re never going to move any of this forward. I think this is something that has been vetted at a number of points of interest in the City.”

The one-year pilot program includes a contract with California-based AD/S Companies for $96,811 to fabricate and install two map cases and the 32-foot pylon at the north end of the Promenade.

DTSM hired Santa Monica-based design firm Suisman Urban Design to develop the final design of the wayfinding project; the design plans were presented to the ARB in October 2013.