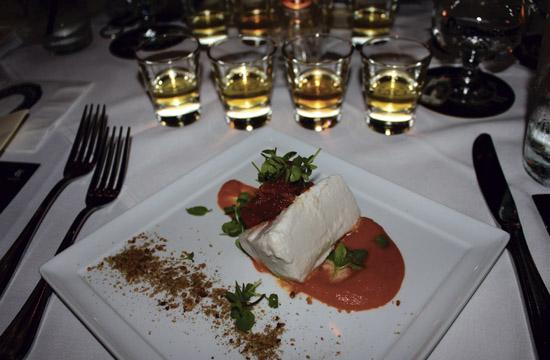 The Herradura Tequila distillery is located in Amatitán, Jalisco, Mexico. It was formally founded in 1870 by Félix López and the business remained in the family for over 125 years. Today it is owned by US beverage maker Brown-Forman, but the tequila is still made in the same place and facilities under a Mexican subsidiary.

Upper West Executive Chef Nick Shipp spoke about each dish while servers delivered the plates to the tables in the front room of the restaurant.

Herradura Tequila representatives then spoke about the corresponding tequila, its flavor profile, how it was created, and why it paired well with Shipp’s dish.

Here is a look at each of the courses:

Course 1: A coconut milk and pineapple juice poached Pescado Blanco served on top of a chipotle carrot purée. The fish was topped with a lime-tomato jam and toasted cumin breadcrumbs were served on the side. Herradura Silver was served as the tequila pairing.

Course 2: A braised leg of goat with chorizo-sweet corn flan in Hoja Santa-tomato broth. Herradura Repasado was served as the tequila pairing.

Course 3: Memelita (Oaxacan Pizza) was served with queso quesillo, black bean-huitlacoche spread, roasted tomato, and parsley oil. For those feeling a little adventurous, there were tiny grasshoppers served on the side that were crunchy and salty. Herradura Anejo was served as the tequila pairing.

Course 4: Char-grilled quail with jalapeño and citrus marinade was served over a yellow curry mole with sauce guajillo and cilantro-raisin pistou. A Herradura Cognac Cask Finish Repasado was served as the tequila pairing.

Course 5: For dessert, a coconut pudding was served inside an Oaxacan chocolate shell. Inside was mango and cinnamon. Herradura Port Cask Finish Repasado was served.

As a surprise to end the event, diners were treated to a tasting of Herradura Tequila Seleccion Suprema that’s aged for 49 months. It generally retails for $55 per shot (the same cost as the entire Upper West five-course pairing event).

Upper West hosts a special pairing event once a month. The dinners change between beer pairings, wine pairings, and liquor pairings. Space is limited and reservations quickly fill up once the events are announced several weeks in advance. Visit the website or follow the restaurant on Facebook or Twitter for updates. The restaurant is located at 3321 Pico Boulevard, Santa Monica.

For reservations or more information, call 310.586.1111 or visit www.theupperwest.com.