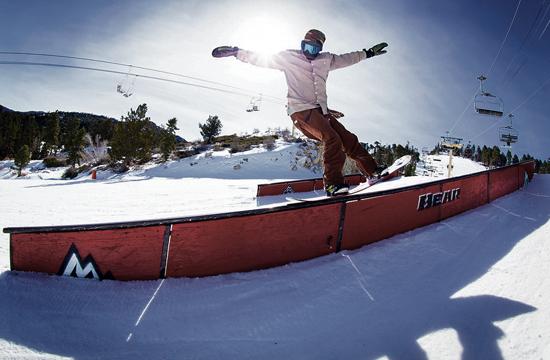 It may have been a warm winter in Santa Monica, but Big Bear Mountain Resorts (BBMR) just two hours away added nearly 11 inches of snow over the weekend from the slow-moving winter storm.

In the lead-up to this weekend, about 85 percent of both Bear Mountain and Snow Summit slopes were already open.

A single lift ticket provides access to both Snow Summit and Bear Mountain which are located just two miles apart, and connected via a free inter-resort express shuttle service.

Each resort offers a variety of diverse terrain providing skiers and snowboarders with a combined 438 developed acres, 26 lifts (including four high-speed detachable quads), and more than 55 runs.

“You may not be able to see snow from Santa Monica, but it’s better than you think,” Tregaskis said. “We did get off to a good season and opened prior to Thanksgiving, which is always our goal. We had a good three to four-day snow making run that got us going.”

He said its early season was normal with not a lot of snow, but there were a few two and three inch snow storms that came through.

“We had a really good snow making run before Christmas where we got 80 to 85 percent of both mountains open,” he said. “We were pretty excited and had a decent December period.”

While there was next to no snowfall during February, there was still enough of a base from January snowfall to keep its runs going strong, including its 12-foot high regular half pipe.

“At Bear Mountain we have every lift open but one and at Snow Summit we’ve been able to open every lift but two,” he said. “We’ve been doing reasonably well with a two to three feet base everywhere.”

He said the conditions provided good gripping skiing between 9:30 am to 11:30 am each morning.

He said the runs had been getting a little bit wet and sticky in the flats in the afternoons, but the steep and normal runs remained in good condition.

“It’s quite enjoyable from a skiing standpoint because we don’t have a lot of wind and it’s sunny and beautiful SoCal weather with people in short sleeves,” he said. “It’s a great time to learn because it’s so mild. People really prefer spring skiing.”

Skiers and boarders can enjoy a Sunday fun day at BBMR with mid-week priced lift tickets every Sunday. That’s a full day adult lift ticket for just $60, young adults (13-21) and seniors (62+) for $50, and children for just $25. Restrictions may apply.

To prove that BBMR’s conditions are some of the best out there, season pass holders from any other resort – from Mammoth, to Squaw Valley, to Mountain High – can head to Big Bear and receive half off their BBMR lift ticket. Restrictions may apply.

Bring A Friend For Half Off

BBMR season pass holders can now bring a buddy for half off. Pass holders can bring their season pass and a lucky friend to the Guest Services office at either Snow Summit or Bear Mountain to score 50 percent off a buddy lift ticket for that day. Restrictions may apply.

On any day that a BBMR season pass is blacked out and not valid for use, pass holders can now take it to the Guest Services office at Snow Summit or Bear Mountain and receive 50 percent off a lift ticket for the day. Restrictions may apply.