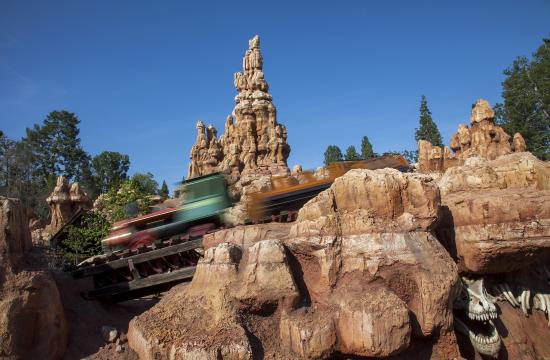 With some new surprises and all the favorite dips and turns, Disneyland park reopened the classic ride Big Thunder Mountain Railroad on Monday.

The attraction has been fully refurbished with an upgraded track, new paint on portions of the mountain, a restoration of the historic Rainbow Ridge Mining Town, enhanced audio and updates to the ride vehicles.

Guests board a mine train for a thrilling, high-speed adventure past the spires and buttes of the old West and into the tunnels and shafts of a dark and mysterious mine.

Since its opening in 1979, Big Thunder Mountain Railroad at Disneyland has carried more than 225 million guests who are warned to “hold onto your hats and glasses” as they prepare to dip and drop into the canyons and caves of the Big Thunder ghost town.

Objects that may be spotted by guests in and around Big Thunder Mountain include a century-old stamp mill, hand-driven drill, press gears, picks shovels and other artifacts acquired from abandoned mines in Nevada, Colorado, Minnesota and Wyoming, as well as museums and swap meets.

Subsequent versions of the attraction appeared in Magic Kingdom Park, Walt Disney World, Florida in 1980; Tokyo Disneyland Park in 1987 and Disneyland Paris in 1992.

The miniature town of Big Thunder, seen at the end of the attraction, first appeared in 1956 as part of the Rainbow Cavern Mine Train and Mine Train through Nature’s Wonderland attractions. Many Disneyland fans still call it by its original name: Rainbow Ridge. The town is said to have been a favorite of Walt Disney, who built miniatures himself as a hobby.

Other items from the Nature’s Wonderland days include the caves of Rainbow Caverns, the rockwork buttes at the entry to Balancing Rock Canyon, and some of the animals – the dynamite-devouring goat, coyotes, possums, snakes, turtles, vultures – who appear among the rocky cliffs surrounding the mine tunnels.

A one-day one-park ticket is $91 while a one-day two-park ticket (visit both Disneyland and California Adventure is $137.