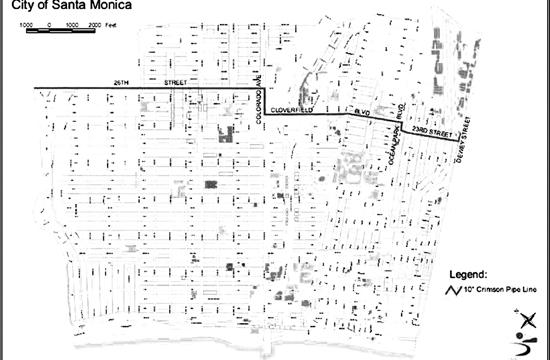 Santa Monica and Crimson California Pipeline, L.P. will return to the bargaining table, as council members unanimously authorized City Staff on Tuesday to renegotiate the franchise agreement with the oil firm to operate an existing north-south crude petroleum pipeline running beneath the City. Specifically, the City Council hopes to reduce the length of the agreement from 20 years to 10 years.

Crimson was seeking to operate and maintain the existing pipeline to transport crude petroleum products through 2034.

City Hall would still be in line to receive payments for allowing the existing pipeline to continue running through Santa Monica, but the financial figures would change under a 10-year deal.

If the 20-year franchise agreement were approved earlier this week, Crimson would have been obligated to pay City Hall a franchise fee of $148,705 plus a $20,000 reimbursement for administrative costs.

Council member Tony Vazquez suggested the 10-year term, giving the City flexibility to revisit the state of the pipeline in 2024.

A major concern is the pipeline’s age. The pipeline was built in 1941, before Santa Monica was officially incorporated as a municipality. Agreeing to a 20-year franchise agreement would mean the contract would expire just a few years short of the pipeline’s 100-year mark.

Built in 1941, the carbon steel pipeline is 10 inches in diameter and runs for 3.9 miles within Santa Monica along 26th Street from the northernmost city limits to Colorado Avenue. Once it reaches Colorado, the pipeline turns west until Cloverfield Boulevard. From there, the pipeline then heads south along Cloverfield until it reaches Ocean Park Boulevard. The pipeline heads west along Ocean Park for a few blocks to 23rd Street, where it turns south to Dewey Street before finally traveling east to Santa Monica’s southern most border.

In terms of safety, Crimson is legally bound to maintain a 24-hour fully operational emergency response system “designed to control and monitor rates of flow, pressures and fluid characteristics.”

The Santa Monica Fire Department would be immediately notified of a pipeline break or release.

“Crimson has experienced relatively minimal pipeline releases in pipelines that it operates outside of Santa Monica,” City staff stated, adding the company must regularly test the pipeline’s integrity and carry insurance coverage of $45 million in the aggregate.

According to the resolution, the pipeline originates in Ventura County and travels southeast before terminating near Wilmington and distributes crude petroleum to refineries. The pipeline runs about 87 miles in length. As much as 25,000 barrels of crude oil is transported by the pipeline daily, City staff stated.

The pipeline franchised to Shell within Santa Monica’s borders was sold to Crimson California Pipeline in 2005.

Council member Gleam Davis was not present at the March 18 council meeting.