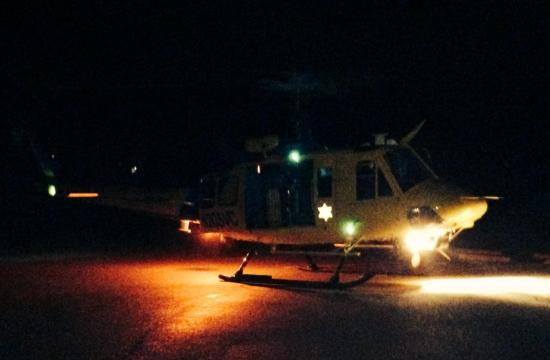 At about 6:30 pm Saturday, a hiker called the Malibu/Lost Hills Sheriff’s Station via cell phone to say he was one of four hikers trapped in the “Rock Pool” area of Malibu Creek State Park and that the water was rising.

The storm had caused weather conditions that were terrible for hiking and the rescue effort was considered to be high risk.

Rescuers had to use four wheel drive vehicles to access the remote area, then climb rocks and hike the rest of the way across slippery rocks and trails that crumbled under their feet due to days of heavy rains.

Rescuers reported about 8 pm that the water was rising with each intermittent rainfall, and the hikers were trapped by the raging waters with no way out. There was serious concern the hikers could be overcome and drown before rescuers could reach them.

Due to cloud cover and nightfall, the remote wildness area was completely dark and the only lighting available to rescuers was what they carried, including small lights on their helmets and flashlights.

The Sheriff’s Department said the fact that one hiker was able to get cell reception was extraordinary considering the lack of cell towers in the state parks area.

The hiker’s cell phone battery was draining quickly and was quickly reduced to 20 percent power even though rescuers were only texting with the hiker to save the hiker’s cell battery power.

Throughout the night, in order to get to near the hikers, rescuers drove, then hiked, climbed and ultimately used an inflatable raft to get close to the hikers.

While rescuers were able to see one victim’s flashlight, they were unable to see the hikers, even as the night wore on into after 2 am Sunday.

Meanwhile, multiple rescue helicopters attempted to get to the hikers in an effort to at least help find them and light the area so ground rescuers could get to them and save them.

Three different flight crews were not able to get through to the site due to lack of visibility and the high risk of flying into the cliffs.

The Malibu SAR, firefighter and lifeguard ground rescuers continued to inch closer to the hikers, but were slowed by the risk of falling off of cliffsides or into the raging waters in the dark.

The hikers had a flashlight that ran out of battery in the first few hours of the rescue, leaving the rescuers blinded as to their exact location and the hikers unable to signal them.

Rescuers blew whistles in an effort to help the hikers guide them in, but the raging water made it impossible to hear even each other.

The night wore on until well past midnight. The temperatures had dropped into the mid-40’s and kept dropping.

Even wearing special clothing, the rescuers were soaked and were feeling the effects of the onset of hypothermia. Meanhwhile, the hikers texted they were very cold. Hypothermia was a threat to everyone, as was the dangerous terrain and raging waters.

Rescuers continued to try to reach the hikers but had run out of options of ways to potentially get to them, as their path was blocked by raging water, cliffs and long drops down the canyon. The quickly rising water had covered paths that had existed earlier that day, allowing the hikers to get stranded.

By 2:30 am Sunday morning, a Ventura County Sheriff’s helicopter rescue crew reported they were on the way to attempt to get through the weather and reach the hikers. They were the fourth air crew to consider responding that night. They made a daring effort and flew between cliffs with low visibility and high danger.

The ground rescuers guided the helicopter crew to where the hikers were likely trapped. Hovering between cliffs less than 200 feet apart, the Ventura Sheriff’s flight crew used their spotlight and spotted the four hikers within minutes, just a few hundred yards from the ground rescuers.

The hikers were sitting on a boulder, surrounded by raging waters that nearly touched the huddled and frightened hikers in the dark.

A Ventura Sheriff’s rescuer was lowered down to the boulder using a hoist, and one by one, the hikers were brought into the safety of the rescue helicopter.

The hikers were flown to the nearby landing zone, treated for the onset of hypothermia and able to return home. The hikers are three men and one woman, 25-26 years old, all from Long Beach.

LA County Sheriff John Scott said on the ground and in the air, the bravery and actions shown in this search and rescue was beyond the call of duty.