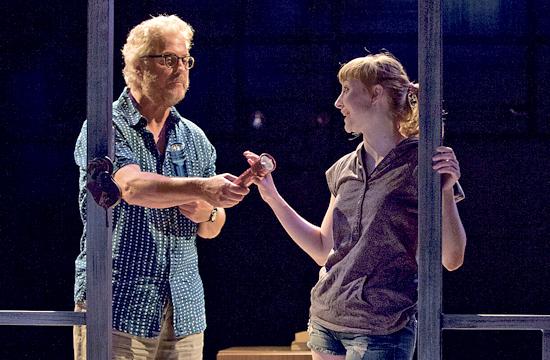 Chicago’s Steppenwolf Theatre Company is one of the most respected theatres in America so you can be sure if we’re lucky enough to get one of their productions, you’re in for a genuine theatrical treat.

Well, get ready to feast your eyes for Greg Pierce’s splendid play, “Slowgirl,” has traveled cross country very well with the original cast and under the immaculate direction of Geffen Playhouse’s Artistic Director, Randall Arney, and the extraordinary acting skills of William Petersen, you will experience stage craft in its purest, most controlled form, both from Petersen and a most talented, delightful co-star Rae Gray, who plays Becky, a bubbly motor-mouth 17-year-old teenager who, my mother would describe as having been injected with a phonograph needle (I know – this is an old reference).

Becky has been sent by her mother to visit her Uncle Sterling (Petersen) who lives in a secluded house in the jungles of Costa Rica.

His only interaction is with an unseen Hector, an all-around handy man, and Hector’s girlfriend, also unseen, who occasionally “services” the reclusive Sterling, who spends most of his days lying in a hammock reading and napping.

Becky and Uncle Sterling have not seen each other for years. He appears to be extremely introverted and it’s almost painful for him to interact.

When she first appears, he is quite awkward and doesn’t know how to answer her barrage of questions.

Before answering, Petersen’s Sterling goes through an internal process, his discomfort illuminated by his strong subtext, and he never quite finishes a sentence, which Becky eventually calls him on.

Throughout playwright Pierce’s 90-minute beautifully crafted script, like the proverbial peeling back the layers of an onion, we see Becky and Sterling slowly reveal their truths and begin to bond.

After she prods him as to why her father doesn’t like or trust him, he reveals that at one point in his life, his business partner was accused of embezzlement and went to prison, but he was exonerated.

Eventually he and his wife divorced and he wound up escaping to this house in the middle of the jungle, which is reinforced by Sound Designer Richard Woodbury’s subtle sounds of the indigenous animals, which in the beginning creeps Becky out. She’s anxious that there are no doors on her uncle’s home, which he says he takes off to keep the house cool. She is scared of coming face-to-face with the wildlife living alongside his home.

He tells her he is at peace with the chirping parrots and birds, monkeys, iguanas, and the very dangerous coral snakes, assuring her that humans are generally not on their food chain.

Becky bounces around this unfamiliar setting quite afraid of every sound she hears.

In an attempt to be hospitable, Uncle Sterling offers her a smoothie using strawberries that are neatly packed in individual tiny plastic bags, perhaps a metaphor for his sparse, but organized existence.

As they become more comfortable with each other, Becky’s bombastic demeanor softens and she reveals that she is in a lot of trouble.

She is being blamed for a potentially deadly action of one of her classmates who is slightly retarded and whom they refer to as the slow girl.

Despite the seriousness of Becky’s situation, there are many laughs throughout the play and one particularly charming scene is in an imagined labyrinth that Sterling and Hector built where Sterling goes to calm himself down. Sterling demonstrates to Becky how to walk the design saying it should be done in silence, which at this particular point, Becky seems incapable of executing. Eventually, there is a meeting of their minds with Sterling taking an unexpected action.

The production values of “Slowgirl” are simple, but impeccable from the opening marimba music fused with jungle sounds by Richard Woodbury, Scenic Designer Takeshi Kata’s design of Sterling’s home and surroundings, which he fills with foliage capturing the look of the environment, all of which is enhanced by Lighting Designer Daniel Ionazzi’s palette.

The production is set up in a semi theatre-in-the-round format with the audience flanking the center stage on both sides, which sometimes impedes the sightlines, a small price to pay, however, to get to watch two stage-trained actors give fully actualized performances.

There’s an old show biz axiom that if it’s not on the page, it’s not on the stage so between Pierce’s well-written play, Randall Arney’s masterful direction, and the highly skilled actors, we see two fascinating, distinctly different characters who allow us to see their fears and conflicts through strong inner lives and very real moment-to-moment reactions that kept the audience fully engaged until the very last piece of dialogue was spoken.