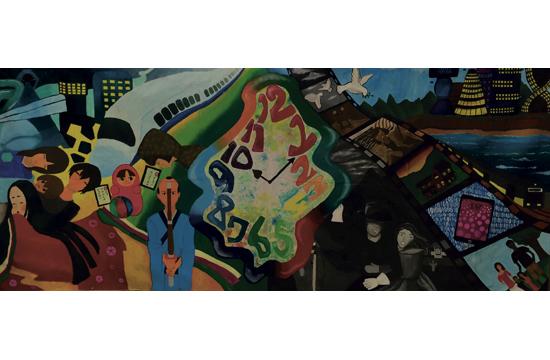 The advanced visual art students of John Adams Middle School under the tutelage of art teacher Jennifer Joyce have done it again.

This project was made possible through JAM, or “Japan Art Mile,” a program sponsored by the Japanese government.

The program was first initiated in 2005 with the mission to promote global peace.

The idea is to raise children with a global view, and encourage them to understand and respect people from diverse cultures.

The program is striving to raise children with responsibility for their thoughts and behaviors through work on global issues in collaboration with the same generation of students in other countries.

This international mural exchange program started out with only a handful of participating countries, but has now grown to include approximately 165 murals from over 20 countries.

John Adams Middle School is currently one of only eight middle schools in the United States participating in the mural exchange.

This year’s mural theme is: “Dreams are Forever.”

In other words, core values remain the same in past, present, and future times.

Using an online forum that translates languages, the students were able to successfully collaborate, and create one mural that will first be displayed in several exhibits around the world, and will culminate in being attached to Japanese public transportation to “ride through the streets of Japan.”

The coordination of incorporating the artwork and thematic ideas of 60 plus art students was not without its challenges.

For this reason, students began the process at the beginning of the school year, and they are now celebrating its completion.

All of the students have taken great pride and ownership of the mural and will be sad to see it leave.

However, they plan to participate again next year, and the students look forward to working again with their newfound Japanese friends.