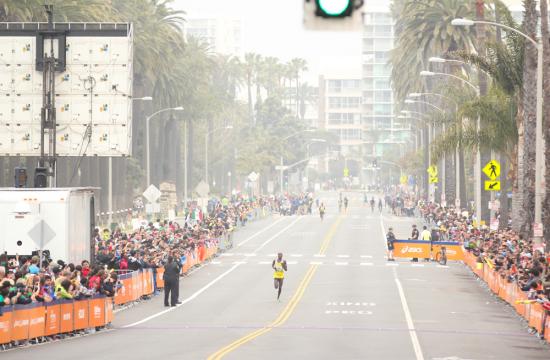 The “Stadium to the Sea” – or the Los Angeles Marathon, as it is more commonly known – is ready for its 29th race this weekend, as runners will be pacing themselves this Sunday on a 26.2-mile course snaking from Dodger Stadium to just shy of the Santa Monica Pier.

Along the way, runners will cut through Century City as well as West Hollywood, Beverly Hills, Brentwood, Westwood, and other Westside communities.

The finish line is near the California Incline. A “Finish Festival” highlights the end of the racecourse. Headlining the Finish Festival is the ASICS LA Marathon Treadmill Challenge and the Michelob Ultra Beer Garden. Other entertainment activities and giveaways will also be featured.

The Finish Festival is located at Santa Monica Boulevard and Second Street; it will be open from 9 am to 3 pm.

Several charities will be showcasing their respective programs along the course.

During the Santa Monica segment of the marathon, eight charities will be featured, including Corazon de Vida Foundation, Back On My Feet, Dr. Susan Love Research, Train for Autism, Reading to Kids, Race for Veronika’s Place, Meals on Wheels West, and Team Parkinson.

Just like this year, the first-ever Los Angeles Marathon took place on March 9.

When the first iteration of the footrace kicked off of March 9, 1986, nearly 11,000 people took part in the race. The marathon’s course was primarily in and around Downtown Los Angeles, finishing at the Memorial Coliseum near the University of Southern California.

In 2008, the marathon took on its current iteration, with the start line at Dodger Stadium and the finish line on Ocean Avenue near the California Incline in Santa Monica.

Organizers announced Feb. 26 more than 25,000 runners signed up to participate in this year’s Los Angeles Marathon.

The field also includes more than 3,700 charity runners who are participating in the race on behalf of about 90 charities.

The race begins at 6 am and will be broadcast live on KTLA.

Coincidentally, March 9 is the start of Daylight Saving Time, meaning clocks should be adjusted one hour forward at 2 am the morning of the race.