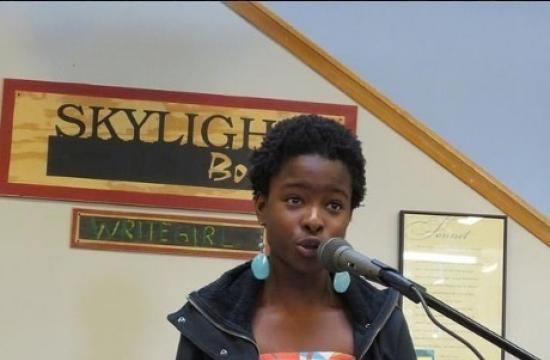 New Roads High School sophomores Amanda Gorman and Alex Thorland have both earned high-profile accolades that will take them all the way to New York City this spring; Gorman for her student leadership, and Thorland for his acting prowess.

Gorman, founding member of the New Roads’ chapter of Girls Learn International (GLI), was selected by youth advocacy group SustainUS as a delegate to the UN’s 58th session of the Commission on the Status of Women – the annual gathering of States to address critical issues related to gender equality and women’s rights.

Taking place at United Nations Headquarters in New York, from March 10-21, the session is focusing on “challenges and achievements in the implementation of the Millennium Development Goals for women and girls.”

Member States, UN entities, and accredited NGOs from around the world will take stock of progress and remaining challenges towards meeting the Millennium Development Goals, which include eradicating extreme poverty and hunger; achieving universal primary education and promoting gender equality and empowerment of women, among others.

“Amanda came running into my classroom shouting ‘Guess what?’ the day she found out that she was selected as a delegate,” said Alexandra Padilla, faculty mentor for GLI. “Amanda first learned about the UN’s conference through our connection to GLI but she found this opportunity and applied on her own. I am so proud of her hard work and inspired by her passion and commitment. SustainUS is lucky to have her as their representative, and I cannot wait to hear from Amanda about the experience. I just know she will do everything she can to get the most out of this incredible opportunity.”

Gorman said she was extremely touched by all the support she has received for this opportunity.

“I thank all of you who contributed in hugs, smile, praise, and more. I could have never done this without you,” she said. “I am so grateful to be able to lend my voice to such an essential issue.”

Students from 25 LA schools were represented at the semi-final competition in February at Marlborough School in Los Angeles, where Alex delivered a poignant performance of Henry V’s St. Crispin Day Speech and Sonnet 130 to secure one of just six slots in the finals.

The six finalists competed on March 8 at the Shakespeare Club in Pasadena, where Alex won first place and the opportunity to compete in ESU’s National Competition in New York City from April 27-29.

As the winner, his all-expense-paid weekend in New York City will include acting workshops, a Broadway show and sightseeing. The winner of the National Competition will receive an all-expense-paid summer acting course in London.

Alex’s mentor Elisa Schultz says, “I am so proud of Alex! He is a delight to work with and exceptionally talented. No matter what happens, he is already a winner in my eyes. I am grateful to New Roads and the drama department for supporting our participation in this prestigious competition.”

Schultz, who is the Assistant Director of New Roads School’s Spectrum Program, was a mentor to Spencer Moor (Class of 2013) last year’s competition.