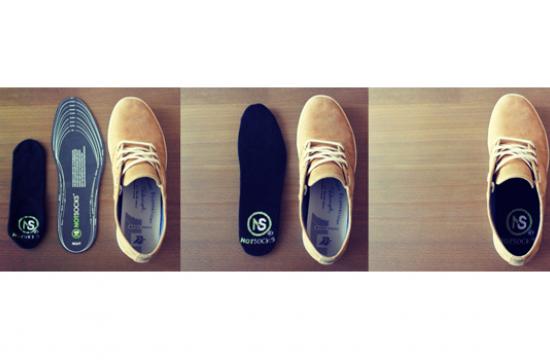 Kenny Sanders’ sockless invention had casual beginnings: he thought of the concept one day wishing that there could be a solution for his distaste toward socks.

NotSocks provides a way to go sockless without it taking a toll on the sense of smell, as it utilizes effective odor-eating material.

This sustainable product consists of charcoal and bamboo elements, both of which help eliminate the stench that inevitably comes alongside wearing shoes without socks.

NotSocks products consist of ultra-thin, custom-fit footbeds, which the socks wrap around, that are put on top of the shoe insole.

The fusion of charcoal and bamboo was the result of lots of experimentation. Before he thought of the NotSocks concept, Sanders frequently tried various methods to get rid of the “inescapable stench” that results from a sockless lifestyle, including using baby powder and odor-eater sprays.

Sanders also tried out different fabrics in hopes of finding an odorless solution.

The motive behind the product is simple.

As a child growing up in a small farm town in Utah, Sanders was very accustomed to running around barefoot and always hated the idea of socks.

Currently, as an adult and professional athlete, Sanders’ hatred toward socks has not diminished in the slightest.

However, it became a reality that there was a need to create a sockless, yet socially acceptable means of going barefoot.

Once he thought of the initial idea of a footbed and sock wrap, he immediately purchased a cheap sewing machine and started the method of trial-and-error.

His level of dedication and determination is apparent by examining his persistence with taking on unfamiliar tasks in order to see his idea come to fruition.

“It took a long time to learn to sew,” Sanders said.

Sanders’ confidence behind his product is also evident: he moved to downtown Los Angeles, where NotSocks is based, from his hometown in Utah solely for the purpose of the company.

He has considered himself an entrepreneur his whole life even as he worked for other companies and is aware of the potential of his innovative ideas. Sanders decided to go full-force with NotSocks with the mindset that he was going to start his own company.

NotSocks can serve a variety of audiences.

From runners to skateboarders to women with flats to men with loafers or boat shoes, all kinds of people can find usage in NotSocks products as socks can often produce discomfort during physical activities.

But fashion trends are leaning toward the sockless look as well, as even the more professional, put-together looks are starting to sport a sockless style.

“If you look at models in GQ or at J.Crew, they’re all sockless,” Sanders said.

The product has the same warranty of a regular sock, if not better, since it consists of odor-eating materials.

Sanders said that it can be worn multiple times a week because of its charcoal-bamboo ingredients.

Though NotSocks launched just two weeks ago, there have been orders coming in from across the world due to the impact of social media. There are big upcoming plans ahead for the company, as Sanders envisions it as a huge retailer in the future.

“When someone is walking by sockless, the first thought that runs through your mind would be that they’re probably wearing NotSocks, since it’s gross to think that they’re barefoot in sweaty shoes,” Sanders said.

Ultimately, the goal of NotSocks is to become the default solution for a sockless lifestyle.

The products provide all the benefits of a sock without actually wearing one, such as moisture management and reusability.

“We want to change the game in socks,” Sanders said.

The socks can be washed and reused without losing efficacy.