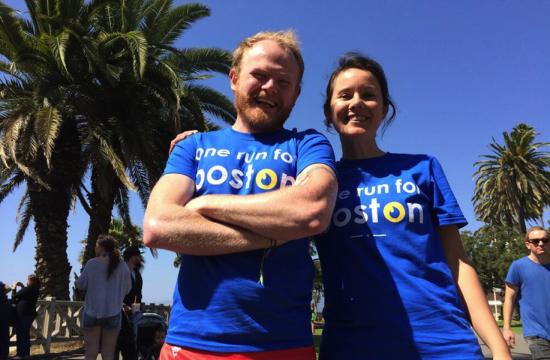 One Run For Boston, a non-stop, cross-country relay to support the “One Fund Boston,” began Sunday in Santa Monica, which will end April 13 in Boston.

About 2,000 runners are expected to participate by the time the relay reaches Boston.

The relay’s aim is to raise $1 million to help support the survivors of the 2013 Boston Marathon bombings.

At 1 pm, Odom carried the baton for the first steps of its 3,300 miles journey along Ocean Drive to San Vicente Boulevard.

He was in Boston for the finish of the first “One Run for Boston” relay in 2013 and carried the baton the final few meters along Boylston Street.

At the time he was in a wheelchair as a result of the injuries he sustained in the bombings.

But 11 operations and countless hours of physical therapy later, he has learned to walk again and his inspirational progress symbolizes the courageous spirit shared by those impacted by the bombings.

At San Vicente Boulevard, Odom handed the baton to the first group of 100 runners who continued on to UCLA Drake Stadium.

From there, stage two of the relay headed to Griffith Observatory for a photo opportunity in front of the Hollywood sign.

More than 800 runners are anticipated to finish the relay in Boston two days before the first anniversary of the 2013 Boston Marathon bombings.