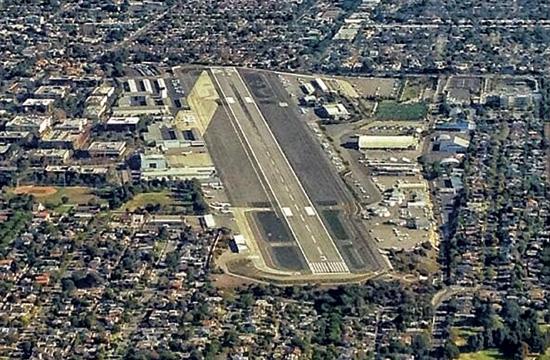 The exact future of Santa Monica Airport (SMO) is still in the balance. Yet, after nearly four hours of public testimony Tuesday evening, one thing appears relatively certain: SMO, if ever shut down, would not become Century City West.

Just the same, the Santa Monica City Council gave direction just before midnight on Tuesday to essentially find a way to either limit SMO’s current operations or shut down the airport completely.

Council members unanimously voted to direct City staff to develop an airport concept plan based upon low-intensity use and new leasing guidelines.

With the vote, City Hall will continue to look into ways of how to assert control of SMO and take steps leading to potential closure of some or the entire airport by July 1, 2015.

The council direction also could lead to the shortening of the runway and ensure the City-owned property does not give way to high-rise or other majorly dense development.

How the council directions will ultimately play out remains to be seen, yet it was made clear by City Attorney Marsha Jones Moutrie that council members would not be making a final determination of the airport’s future at the March 25 meeting.

“We can’t close the airport now,” Moutrie told her colleagues. “This is contingency planning. We don’t know what opportunities we’ll have in the future.”

City Hall received about 200 emails addressing the airport’s future in anticipation of the council’s meeting, Moutrie said. There were at least 101 chits submitted to City Clerk Sarah Gorman.

Leading off the public testimony was State Sen. Ted Lieu, who represents Santa Monica in Sacramento and is running to succeed Henry Waxman in representing the City in Washington, D.C.

“We are at a significant crossroads. I am here to urge you not renew [the airport] lease. We are experiencing higher levels of air pollution because of this airport. There are so many good uses for that land,” Lieu told council members.

“There was a time when an airport in this place made a lot of sense. There is another time now. This is one of the most dense populations in the region,” Bonin told council members. “This airport is now in a place that produces noise and safety hazards and pollution.”

While two elected officials pushed for the closing of SMO, a wide variety of perspectives were shared with the council during public testimony.

There was no clear majority of speakers favoring or closing the airport. Those who spoke in support of keeping the airport operational cited its economic benefits and necessity for natural disaster survival.

For example, a few speakers pointed out the airport is an economic engine bringing the City an estimated $250 million of economic activity.

“I think it’s going to be a regrettable action in the long-term,” the first speaker after Ted Lieu told the council if it goes through with closing the airport.

Others warned the council of how a closed airport could become the ultimate land-grab for developers.

Another point rose to the council: advancements in aircraft technology would significantly reduce air and noise pollution.

A few speakers cautioned against those who proposed replacing the airport with a park, opining the Great Park, which replaced the El Toro Air Base in Irvine, is a “ghost town.”

Still others said SMO is a great community asset, stating they spend quality time with their respective children at the airport.

A pilot told council members if SMO was shut down, the flight path to LAX Airport a few miles to the south would be altered and 747 jets could fly about 2,500 feet above Santa Monica en route to the international airport.

Indeed, it has long been contended by SMO supporters that LAX traffic coming in from the north and west is forced to travel east toward downtown Los Angeles before making a u-turn toward the international airport.

Those who spoke against SMO – some of whom lived underneath the flight path – told council members the planes flying over their respective homes were too loud and posed a significant safety threat.

“People would be shocked if they knew what we had to deal with,” Ellen Brennan told the council of the noise levels residents living directly under the flight path.

One resident who lives under the flight path told council members every time a plane takes off, she wonders if it would “make it.”

“It’s like living in Tel Aviv with the suicide bombers,” Venice resident Judy Russell told the council, describing living under the flight path as “terrorism.”

Airport opponents cited recent plane crashes, including the one claiming the life of a local developer in September 2013, as evidence of the threat to safety posed by SMO’s users.

A professor from Loyola Marymount University stated planes flying from SMO have a significantly adverse impact on the environment.

Addressing concerns about whether SMO would be a land grab for developers, council member Kevin McKeown suggested the airport, in the event it was shut down, be used for low-impact and low-intensity use.

“The airport land will never be used for high-rise development,” McKeown said. “Frankly, it’s not the appropriate site for the kind of development that might appropriate in other parts of our City or the region. There’s no mass transit anywhere near this site.”

Mayor Pam O’Connor echoed similar thoughts, saying if SMO were shut down it would not become Century City West.

“These are public lands. The people of Santa Monica will ultimately decide how to use it. It would not be sold off to developers for high-rise kind of development. That’s just alarmism,” O’Connor said.

Mayor Pro Tem Terry O’Day was present during a portion of the SMO agenda item but had to leave during public testimony due to a family emergency. Accordingly, the council vote was 6-0.