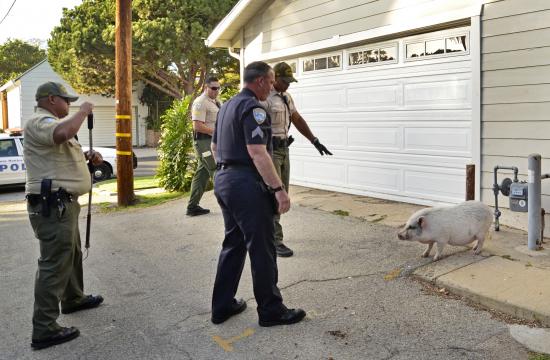 A loose pig had authorities on the run in Santa Monica on Wednesday afternoon after a handful of residents reported the oinker roaming their neighborhood.

Santa Monica Police Department Park Rangers and Downtown Service Officers responded to the 500 block of the alley east of 10th Street at about 4 pm after multiple reports of a loose pig on the run.

SMPD Community Service Officer Ed Burns said several residents in the area saw the pig roaming around their neighborhood and called police to capture it.

“This turned out to be more challenging than expected, because the pig, which was about the size of a medium-sized dog, kept running away every time officers tried to grab it,” Burns said.

Burns said a park ranger also tried to snare the pig with a come-along (see the pole apparatus in the second picture), but the animal was strong enough to pull away and knock the ranger down in the process.

“The pig was eventually cornered against a garage and safely placed inside a cage, then transported to the Santa Monica Animal Shelter,” Burns said.

Since the pig had no collar or ID tags on it, officers were unable to locate the owner.

The Animal Control office is hoping someone will recognize the pig and notify the owners so they can retrieve it at the shelter.