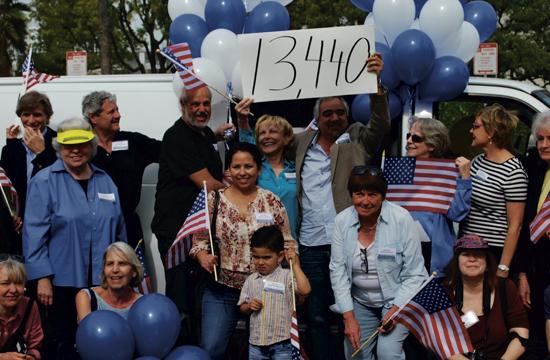 Ken Genser Square was filled with congratulatory hugs, cheers of accomplishment, and festive balloons Tuesday morning. There were also boxes full of signed papers and a few members of the local and regional media, as the Santa Monica-based volunteer group Residocracy.org delivered 13,440 signatures petitioning to overturn the planned Bergamot Transit Village development at the old Papermate site at 1681 26th Street.

The number of signatures collected, which represents about one in five registered Santa Monica voters, still needs to be verified by city and county officials. Unless about 7,000 of the signatures are thrown out or otherwise not verified, the referendum campaign should hold and it would be on the Santa Monica City Council to invalidate the Hines development agreement (DA) outright or hold an election to give Santa Monica voters a chance to decide the fate of the project.

About 100 people who supported the referendum campaign, which was spearheaded by resident and former city council candidate Armen Melkonians, appeared in front of City Hall March 11. Collectively, the referendum supporters ushered the 31 boxes of signed petitions from a van at the edge of Ken Genser Square to the City Clerk’s office.

“We did it,” exclaimed Melkonians, the founder of Residocracy.org, in front of a cheering group of supporters surrounding him on the steps of City Hall. “Today is a historic day in Santa Monica.”

Volunteers of the referendum campaign gathered the 13,440 signatures within 28 days, just ahead of the deadline when the petitions were due to the City Clerk’s office.

Once the City Clerk’s Office verifies the signatures in the next few days, it will send the petition to county officials. There, each signature will be crosschecked with county records to determine if they are actually a registered voter.

The verification process will also ensure each signature is from a real person living in Santa Monica and there are no duplicates.

Residocracy.org only needed to gather about 6,100 signatures, which represents 10 percent of Santa Monica’s registered voters, in order to qualify for a referendum. The referendum campaign more than doubled the minimum threshold.

Melkonians, who admitted he aimed for 13,000 signatures when he launched the referendum campaign after council members narrowly approved the Hines DA last month, said the fact that one in five registered Santa Monica voters supported the petition to rescind the project should send a clear message to the city’s elected officials.

“I feel with 13,440 people who signed the petition, which is more than Pam O’Connor or Bob Holbrook have earned votes, it’ll be political suicide for them not to rescind this project,” Melkonians told The Mirror. “The residents have spoken.”

Both O’Connor and Holbrook are up for election this year.

One referendum supporter said the campaign against the Hines DA was empowering for many citizens.

“There are people who were very upset by this. But the majority of people were thrilled,” Ellen Brennan told The Mirror. “I’ve had people stand in line at markets to sign this. This is the first chance they’ve had to be sure their voice will be heard.”

Mike Feinstein, who played a role similar to Melkonians during the Civic Center referendum in 1993, said these kinds of grassroots campaigns usually result in improved land uses. He said this referendum to veto the Hines DA “could lead to something much better.”

“I think what we find here is every time the residents are reacting with the referendum, it ends up leading to something good. That referendum [in 1993], instead of an 84-foot tall building, we got Tongva Park,” Feinstein, a former Santa Monica mayor, told The Mirror. “In 1973, we did a referendum to save the Pier, and we still have a pier. In 1989-90, we did a referendum against a big commercial development at the airport, and now, after we win with the FAA, we’re going to be able to put up a regional park.”

If the council decides to place the referendum on the ballot, Feinstein believes there is enough support at the polling booths to ensure the iteration of the Hines DA approved in February does not go forward.

“The number of signatures turned in should erase any doubt that the referendum would win and the project would be defeated in November,” Feinstein said. “The council would be insane to hold a special election at public expense, in a move like Chris Christie did by scheduling the U.S. Senate race differently than the governor’s race in New Jersey.”

Feinstein was referring to when Gov. Christie scheduled a special election on Oct. 16, 2013, to fill a U.S. Senate seat left vacant by the death of Frank Lautenberg, just 20 days prior to a Nov. 5 general election in which the governor, local offices, and the entire state legislature were up for a vote. According to news reports, the special election cost New Jersey taxpayers as much as $24 million.

“The time between now and when this comes to the council, [Hines] needs to do some soul-searching,” Feinstein told The Mirror. “What Hines needs to do is give careful thought to is whether they would support a project that would meet the community concerns in the six or seven major areas that we heard.”

According to Residocracy.org, more than 350 volunteers helped gather 10,640 signatures. Another 2,200 signatures were gathered by hired circulators; the remaining 600 were collected by other groups.

One day prior to the delivery of signatures to City Hall, the Santa Monica Coalition for a Livable City (SMCLC) filed a lawsuit against Hines/26th Street LLC and the local government.

If the referendum holds up, the law authorizing Hines to build its project at the old Papermate site would be invalidated. Accordingly, the lawsuit might not have any grounds to continue.

However, if the referendum fails, SMCLC’s lawsuit should be able to go forward.