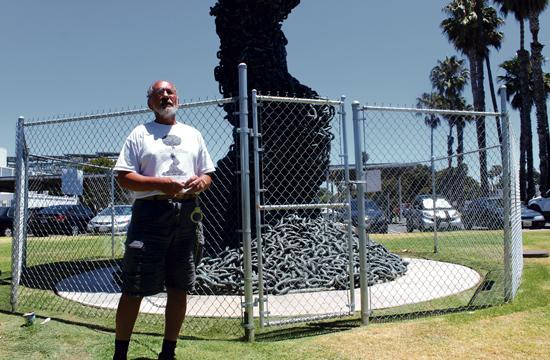 Now that the iconic landmarked ‘Chain Reaction’ peace sculpture has been saved and the City of Santa Monica has started a process of restoration, I thought it might be interesting for people to know who some of the good folks are who saved it.

The hard work that was done by so many dedicated people in the last two years deserves mention and deep appreciation. Many worked tirelessly to insure the late three-time Pulitzer Prize winning political cartoonist Paul Conrad’s 26-foot-tall public art mushroom cloud warning monument will remain standing in the Civic Center.

Certainly there will be many names that should have been included and I deeply apologize for any omissions. Everyone hopefully will ultimately will be given the personal appreciation they deserve. There are so many heroes and unsung heroes!

This “appreciation column” is simply my personal and public way of saying “thank you.” And, as a longtime peace and anti-nuclear activist who was campaigning 25 years ago to help make sure the gifted sculpture was accepted by the City, I’d like to begin this “gratitude list” going way back to 1989.

First and foremost the deepest appreciation must go to Paul Conrad, who inscribed at the base of his timely, creative and unique sculpture: “This is a statement of peace. May it never become an epitaph.”

Deepest appreciation must also go to Joan Kroc, the late San Diego philanthropist, nuclear abolition proponent and widow of McDonald’s founder Ray Kroc, who donated $250,000, anonymously at the time, for the sculpture’s construction.

Roger Genser, who was on the Santa Monica Arts Commission in 1989, and is currently on the Landmarks Commission, deserves the utmost of credit. He was working to insure the Arts Commission would give a positive recommendation to the City Council, and they did numerous times. Much appreciation to every member of that commission.

Much credit must also go to Paul Leaf, who chaired that 1989 commission, helped found the Art Commission, and is still working with the Save Chain Reaction campaign to insure the public art sculpture’s timely restoration.

The four members of the City Council in 1990 who voted “yes” when the sculpture was finally approved were Judy Abdo, David Finkel, Bill Jennings and the late Ken Genser. They deserve our ongoing respect and much appreciation.

The nine former Santa Monica Mayors who are supporting our recent Save Chain Reaction efforts are a testament to how much support and diversity the campaign had. They are Judy Abdo, Richard Bloom, Jim Conn, Mike Feinstein, Ruth Goldway, Paul Rosenstein, Bobby Shriver, Nat Trives and Denny Zane. I say “thank you” nine-fold to each and every one.

I still remember the special Arts Commission meeting back in February, 2012 when we learned ‘Chain Reaction’ might be removed. Along with me and my wife Marissa were two other longtime local peace activists that attended and spoke out at that meeting held at the Santa Monica Civic Auditorium’s East Wing. My very deepest thanks to Cris Gutierrez and Randy Ziglar for their ongoing support and help. We started small but we grew!

We started the Save Chain Reaction campaign “officially” back on March 4, 2012. We need to show gratitude to the former coffee shop cafe ‘Flying Saucers Caffein and Art’ and their owner Ryan MacLeod Morris for graciously hosting, after the cafe’s regular closing time, our very first preliminary meeting.

Kit Dreyfuss was one of the activists at that meeting. She was the wife of the late L.A. Times architecture critic John Dreyfuss, who also loved Paul Conrad’s sculpture. Kit has been involved on every level since day one.

We held our first public event at Vidiots, right across the street from ‘Chain Reaction’ on April 1, 2012. We screened the PBS Independent Lens documentary “Paul Conrad: Drawing Fire” by supportive filmmakers Barbara Multer-Wellin and Jeffrey Abelson, who personally attended the screening. Vidiots and their owner Patty Cohen have been supporting our community for many years, so our deep appreciation goes out to them on many levels.

A most positive action took place on July 9, 2012 when our Santa Monica Landmarks Commission unanimously voted to declare ‘Chain Reaction’ a City Landmark.

There were, in my opinion, some very positive and milestone turning points in our campaign. The initial turning point was when Robert Berman started holding the first of his many fundraising art auctions at his gallery at Bergamot Station. His efforts and know how, along with his dedicated staff member Sarah Mason helped immeasurably to save ‘Chain Reaction’.

Another positive turning point was when Hannah Sloan and Elena Christopoulos came aboard to set up our very professional website and Facebook page. We wouldn’t have had the ability to get the 3,800 online petition signatures without their help and social media skills. They both were a profound asset on many levels.

Another milestone was when respected community activist and fundraiser Abby Arnold volunteered to help the campaign.

Still another turning point was when Russ Barnard, the owner of Rusty’s Surf Ranch on the Santa Monica Pier supportively offered his venue for two successful Save Chain Reaction fundraising events. Deepest gratitude to Russ and his kind assistant Cindy Pfeifer.

One more very important turning point was when our dedicated team member Cindy Bendat conscientiously and successfully reached out to our many supportive neighborhood organizations.

There were many other local and nationally recognized columnists and bloggers that were instrumental in helping to save ‘Chain Reaction’, such as Robert Scheer, the editor of Truthdig ; Peter Scheer and Bill Boyarsky, also of Truthdig; Lisa Napoli of KCRW, political cartoonist Mr. Fish; local blogger Frank Gruber; Mirror columnist Steve Stajich and Daily Press columnists Jack Neworth and Charles Andrews. I’ll always remember, when I visited him, how Charles finished a deadline-due ‘Save Chain Reaction’ column from his hospital bed just a day after his very serious heart surgery operation at St Johns Hospital. Now that deserves extra appreciation!

I must offer my very deep appreciation to the many SAMOHI students who helped with our campaign and who spoke so eloquently to our City Council.

Also, much gratitude to Arleen Ferrara ,who designed a preliminary creative design for a “peace garden” buffer around ‘Chain Reaction’.

I must also mention the expert support we got from Edward Lollis, who maintains the largest online website of peace monuments around the world.

Of course much gratitude must go to our dedicated City Manager Rod Gould, Cultural Affairs City Staff leaders Karen Ginsberg and Jessica Cusick, and City Engineer Ron Takiguchi, as well as our hard working City Council. Their flexibility, commitment and responsible support are most appreciated.

I must say that the utmost of appreciation, gratitude and respect should go to the entire Conrad family, especially Paul Conrad’s son Dave Conrad and Paul Conrad’s wife Kay Conrad, as well as his other children Carol, Libby and James, and Dave’s wife Angele for their dedication, patience, commitment, hard work and positive energy throughout what was obviously a frustrating and exhausting two years.

And, how could I not give the deepest appreciation and gratitude to my loving wife Marissa? She was not only an integral member of the Save Chain Reaction team but, as a longtime artist and art therapist, shared much creative advice, wisdom and hard work throughout the many years of our great City of Santa Monica getting, and now keeping, ‘Chain Reaction’.

Thanks again. I’m sure a “Gratitude List Part 2” will be needed.

* Jerry Rubin is a longtime peace activist, Santa Monica resident and member of Save Chain Reaction.