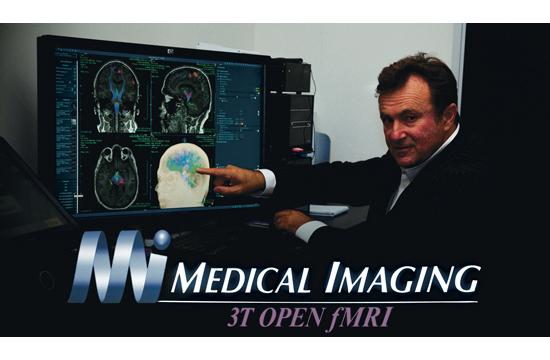 Nearly 30 years ago, a radiology professor at Stanford University admonished then-resident Dr. Bradley Jabour to focus more intently on studying x-rays, instead of entertaining his fascination with other yet unproven technologies such as MRI – magnetic resonance imaging.

Dr. Jabour, however, continued to follow his instincts, learning as much as possible about the emerging field of MRI, and he is today at the forefront of pioneering MRI techniques in the field of neuroradiology and cancer imaging.

Medical Imaging Center of Southern California and its affiliate Smart Brain and Health, of which Dr. Jabour is both the Founder and Chief of Radiology, is located on Wilshire Boulevard between Yale and Harvard Streets in Santa Monica.

This is where Dr. Jabour is on the cutting edge of using techniques called fMRI (functional magnetic resonance imaging), neuro navigation, and TMS Therapy (Transcranial Magnetic Stimulation) to fight a spectrum of neuropsychiatric disorders such as depression and Obsessive Compulsive Disorder (OCD).

The innovative treatment uses Smart Brain’s patented fMRI technology which Dr. Jabour developed with his team of leading scientists in the field to capture images of the brain in action using a 3 Tesla MRI.

“We are literally able to ‘See The Thinking Brain,’” Dr. Jabour said. “By giving the patient specific tasks while we are performing the MRI, we can see the associated areas of the brain light up. fMRI allows us to see the brain’s electronic footprint as it has different patterns associated with normal versus abnormal findings that are seen in patients with depression, OCD, ADD, Alzheimer’s, Traumatic Brain Injury and sports injuries such as football concussions.

In patients suffering from depression, for example, under-activity in the front area of the brain is evident.

“The dorsolateral prefrontal cortex is the executive area of the brain,” he said. “This is the decision making area where a patient plans their life. If a patient is depressed, they exhibit symptoms such as a lack of drive and feelings of hopelessness, and this is reflected in an underactive prefrontal cortex. Conversely, MRI images of a patient with OCD will show increased activity in certain areas of the brain which may result in ritualistic and destructive habitual behaviors.”

After the fascinating images have been acquired and Dr. Jabour has consulted with the patient, he and his team of clinicians then prescribe a treatment plan based on the patient’s history and symptoms.

Patients travel from all over the world to meet with Dr. Jabour.

The treatment begins with a neuro navigation session which Dr. Jabour explains is like a “GPS system for the brain.”

Using non-invasive, neurosurgery 3D techniques, this system sees through the skull and determines GPS like co-ordinates and precise trajectories gathered from the imaging.

“This is what makes our treatment work,” Dr. Jabour said. “fMRI together with neuro navigation ensures we can accurately target the therapy to the precise area of brain that is affected. Because of this we achieve a higher percentage of positive treatment results.”

TMS is an FDA approved outpatient treatment for depression that is safe, non-invasive, and non-pharmacologic.

The therapy uses repetitive magnetic pulses that safely penetrate into the cortex and are directed to stimulate specific nerve cells in the brain. When the nerve cells reach a certain threshold of activity, it jump starts the sleepy neurons that are depressed while it calms down the neurons that are over active.

Although huge strides have already been made in this field, Dr. Jabour believes innovation and discovery are still in their infancy.

“The device [TMS] currently reaches 2.5 centimeters in the brain,” Dr. Jabour said. “We are working to go deeper to allow us to reach the areas of the brain where other disease processes, such as debilitating chronic pain, can be found and treated.

“While I was a young professor at UCLA, I realized I had to combine cutting-edge science with entrepreneurship to deliver compassionate, state-of-the-art and flexible medical technology and care to patients in a comfortable environment,” he said. “Patients can sometimes get lost in systems and bureaucracies in big institutions. And besides, I always believed MRI would revolutionize things. And it proved to be true.”

In addition to being a sought-after lecturer, Dr. Jabour received the prestigious Certificate of Merit Award from the Radiological Society of North America (RSNA) in 1991 for his research in defining the role of PET scanning in detecting cancer in the extracranial head and neck.