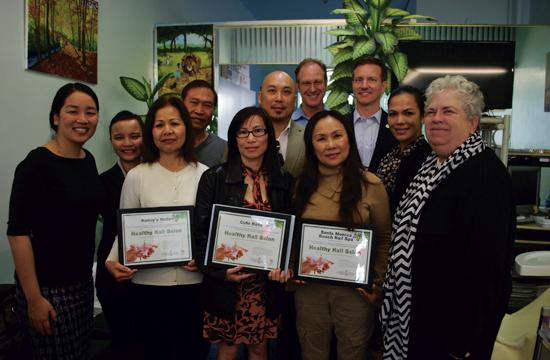 Four nail salons in Santa Monica were recognized in an intimate ceremony on Monday for their collaborative efforts to make healthier work environments while also promoting a “green” agenda and promoting safer products to its customers.

have each met the requirements to be designated as a “Healthy Nail Salon.”

The four salons were honored in a ceremony coordinated by the City’s Office of Sustainability and the Environment and recognized with commendations presented by Mayor Pam O’Connor and Mayor Pro Tem Terry O’Day.

It is the first time any Southern California location received the designation of “Healthy Nail Salon.”

“We hope your example will spread to other salons … (for the benefit of) workers throughout Santa Monica in this field, and, frankly, in our region,” O’Connor told the owners of the four nail salons recognized. “Santa Monica is often the catalyst. You’re on the frontier.”

According to the City’s Office of Sustainability and the Environment, the Healthy Nail Salon Program is “devoted to supporting healthier and safer practices” and aims “to reward nail salons that make safer choices for their employees, customers, and the environment.”

The reason for the Healthy Nail Salon Program: the everyday use of toluene, dibutyl phthalate, and formaldehyde.

The commendation given to each of the nail salons stated the purpose of the partnership between Santa Monica and the California Healthy Nail Salon Collective as “a voluntary program available to nail salons across the city to promote healthier and safer nail salon environments for technicians and customers.”

According to City staff, nail technicians are regularly exposed to harmful and toxic chemicals for a prolonged period of time. Toluene, dibutyl phthalate, and formaldehyde are known as the “toxic trio,” City staff said, and can cause cancer, birth defects, and miscarriages.

“On a daily basis, for long hours, nail salon owners and workers handle solvents, glues, polishes and other beauty care products containing a multitude of chemicals known or suspected to cause cancer, allergies, and respiratory, neurological and reproductive harm,” City staff said in an issued statement.

Further, the commendations stated: “to reduce exposure to these chemicals, the Healthy Nail Salon Program requires that salons go through a rigorous checklist of safety measures including use of gloves by all technicians, installation of localized ventilation, hours of training for all employees, and choosing safer nail products.”

Among the requirements: avoid polishes containing the toxic trio; require all technicians to use nitrile gloves; improve ventilation within the salon; and, ensure technicians are kept abreast of all health and safety information.

Each of the four nail salons recognized March 3 met the requirements.

“No one should have to sacrifice their health and be exposed to chemicals,” Karl Bruskotter of Office of Sustainability and the Environment said.

According to City staff, the California Healthy Nail Salon Collaborative conducted a survey of hundreds of consumers on the Third Street Promenade. The results revealed about 80 percent “support a city program that calls on nail salons to use less toxic products” while 95 percent of respondents “would be more likely to go to a less toxic salon than one that is not.”

The ceremony was held at Nancy’s Nails.

More information about the California Healthy Nail Salon Collaborative and the nail salon community can be found at www.cahealthynailsalons.org.