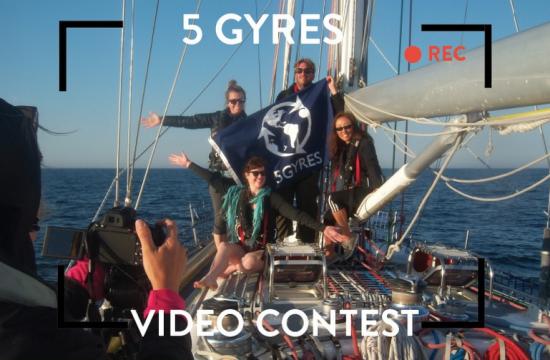 One winner will be chosen to join 5 Gyre’s sailing expedition to study plastic pollution density in the North Atlantic Ocean this spring.

A gyre is a vast ocean whirlpool where plastic pollution accumulates.

To enter, contestants must submit a 30-45 second video describing why they should be chosen and what they’ll do with the knowledge learned from the expedition to solve plastic pollution in their community.

“The video doesn’t need to be fancy, just a quick and sincere appeal to gather online votes,” said Stiv Wilson, 5 Gyres’ policy director. “Whoever gets the most votes wins a spot on the expedition plus airfare to Bermuda and back from Iceland. That’s a prize worth $10,000.”

Not a pleasure cruise, the voyage is a “hardcore sailing adventure” aboard 5 Gyre’s partner vessel, the Sea Dragon, a working ship where crew will be expected to participate in every aspect of the expedition, Wilson noted.

This will include participating in plastic research, ship navigation and handling, and sharing of all onboard duties such as cooking and cleaning.

No sailing experience is required but participants must be able to swim at least 200 meters.

The Viking Gyre Crew Search Video Contest runs through April 22, Earth Day. Contestants, who must be 18 years of age or older and able to join the expedition on the given dates, may enter here.

Just this year, its research on microplastic exfoliating beads in facial scrubs and other cosmetics led to the introduction of legislation in New York and California to ban products containing the particles.

These act as sponges for toxic pollutants and can be ingested by fish and other animals to enter the food chain.

A single cosmetic product can contain as many as 350,000 polyethylene or polypropylene microbeads.

Responding to 5 Gyres, major cosmetic companies, including Procter & Gamble Co. and Johnson & Johnson, have pledged to phase out the use of the plastic microbeads from their products.

For more information on the contest, visit http://5gyres.org/viking-contest.