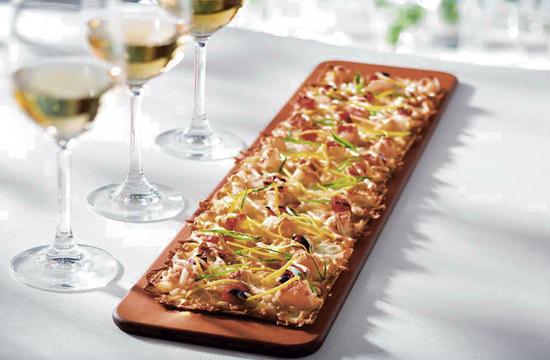 When at least half the world resolves to “eat healthier this year,” it’s great to see that we don’t have to do it at home. Luckily, it appears as though restaurants have taken notice that if they want to see us at their tables, then they’ll have to be able to offer a few items on every menu that won’t sabotage the battle of the bulge.

And then I met the menu at Seasons 52, which has various locations throughout the U.S., and most recently two locations in Los Angeles (Santa Monica and Century City) and boasts that every single item on the menu is under 475 calories.

“Everything?” I ask the waiter, my eyebrow askew with skepticism. He nods and grins.

I wave my hand over the menu.

He promises me yes, and then made sure that I see the array of desserts in the form of “shot” sized delights such as Chocolate Peanut Butter Mousse, Pecan Pie with Vanilla Mousse, and Meyer Lemon Pound Cake – all under 475 calories each, of course.

Given the Seasons 52 premise, I know I shouldn’t be surprised.

Named after the fact that the Seasons 52 menu is seasonal and changes weekly (sometimes daily), it also promises that every single item on the menu from appetizers to mains, desserts to drinks, are all under 475 calories even if you eat everything and lick your plate bare.

“But how much do you get,” I push my server. “Take this lobster and fresh mozzarella flatbread, for example. Is it a two-inch bite? What kind of portions of something so rich can you actually expect to get for under 475 calories?”

“It’s huge, actually,” my server replies. “And that’s the thing – we don’t use butter in anything we cook. Just one meal and you’ll see that when you utilize actual techniques to instill flavor such as roasting, braising, and marinating, you don’t need to fry or drench in butter to get great taste.”

I point out that there’s a filet mignon with mashed potatoes.

“You can really make that for under 475 calories?” I ask.

I can tell he’s explained it every-which way he has ever had to, and at this point all he can do is recommend me in to a spread that will speak for itself.

Since I’m there to prove a point, I want to try the “most unbelievably 475 calorie” items available, and sample an array of items from each section of the menu.

“People are usually the most surprised by the flatbreads and the stuffed mushrooms,” my server tells me. “Also, any of the meats ‘bone-in, as well as the vegetarian tasting plate.”

Taking my server’s cue and ordering to test and impress, I prepare for the following:

After I have my server promise to box up everything I don’t eat (which would be most of each plate) so I can give it away to someone hungry en route home, he tempers me through selecting a cocktail (Prairie Mule – prairie organic vodka, ginger beer, and fresh lime) and what to make of the wine list. Then, in a march of sub-475 calorie plates delivered by proud expediters, the feast begins.

“See?’ my server announces. “Can you believe that each plate is under 475 calories? Take that entire flatbread – it’s the length of your forearm and it is covered in steak and cheese.”

I nod, then point to the Winter Vegetarian Tasting plate. By far, it displays the most food, and taking bites of each item I’m even further surprised at the textures and flavors that are all without butter and no meat.

“The stuffed mushrooms are absolutely decadent,” I insist, as if my server didn’t hint the potential to me prior.

To most, the mere idea of counting calories is enough to ruin an appetite, let alone attempting to navigate a restaurant menu in search for healthy options. Deliciously, not at Seasons 52.

Leave the calculator at home, and let your stomach be as wide as your eyes and rejoice that your hips won’t be.