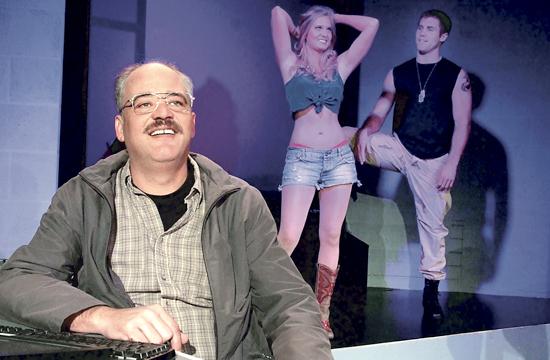 I’ve said it once and I’ll say it again. The Ruskin Group Theatre Company is one of Santa Monica’s treasures and one of the best Equity Waiver theatres in Los Angeles. Under the visionary leadership of Artistic Director John Ruskin and its energetic producer Mikey Myers (who also serves as the Santa Monica Arts Commission Chairperson), the theatre is a breeding ground of theatrical activity.

It has racked up a number of outstanding hits including, “Italian American Reconciliation,” “Faithful,” “The Tragedy of the Commons,” “Digging Up Dad,” “The Collector,” “El Grande de Coca-Cola,” and the biggest hit of all, Rex Pickett’s “Sideways,” which enjoyed a record run of eight months before moving to the La Jolla Playhouse.

Unfortunately, Ruskin’s latest production of the World Premiere of “Talhotblond” by Kathrine Bates and directed by Beverly Olevin, is not up to the level of excellence this theatre has demonstrated time after time.

That said, in this age of online dating, and the inherent dangers therein, the story, based on an actual event, is timely and with judicial cuts in the script and a strong director who could guide the actors in developing fully-actualized characters – not just line readings – this play could be salvaged.

Based on a documentary made by Emmy Award-winning journalist Barbara Schroeder, it is a cautionary tale about the dangers of online liaisons, which could result in obsessive-compulsive behavior, ending in disastrous results.

The story revolves around Tommy’s (Mark Rimer) growing infatuation with a beautiful, young, sexy woman, decades younger than he, who we first meet in silhouette, a device that is used several times throughout the play.

Her screen name is Talhotblond but as the connection becomes more and more personal and intense, she reveals that her name is Jenny (Erin Elizabeth Patrick) and that she lives in West Virginia.

When we finally see her, she is scantily dressed and assumes “layered-on” sexy poses throughout the play, as opposed to her come-hither facade being organically developed.

But, back to Tommy. He’s an aging, unattractive 40 something in a dead-end job and marriage.

His screen name is “Marine Sniper” and he spends his time at work and at home surreptitiously glued to his computer corresponding with Jenny, the text of which is projected onto a rear screen.

Tommy warns Alan that he will teach him a lesson he’ll never forget. Rounding out the office staff is young Pete (Oscar Cain Rodriguez) who delivers messages from the bosses upstairs.

An interesting writing choice is the character of “Tommy Marine Sniper” (Ben Gavin) who represents a young, buff, sexy Tommy who the older Tommy wishes he were. As the play progresses, and he types his messages on his computer, it becomes the dialogue between Jenny and the younger, hunkier version of the older man. As his obsession grows, he distances his long-suffering wife Cheryl (Kathleen O’Grady) who eventually discovers his obsession and insists that he cease and desist immediately. Tommy tries, but can’t, and his behavior grows more and more unbalanced and unpredictable, even confusing his young daughter Gwen (Julia Arian).

Halfway thorough this one-act play, the action became predictable and redundant with the denouement telegraphed long before the final deed is committed.

However, not to throw out the baby with the bathwater, the Ruskin Group Theatre gets an “A” for effort in presenting a production, although flawed, that illuminates the inherent dangers in online connections, illustrating the potential bottom line, as what you think you see might very well not be what you’re going to get, and the possible tragic consequences that could ensue.