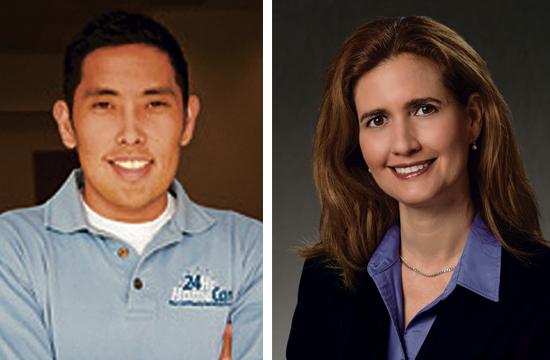 Two leaders in the healthcare field have joined the Board of Directors of non-profit senior social services organization WISE & Healthy Aging.

The announcement was made earlier this week by Board Chairman Thomas Larmore and President and CEO Grace Cheng Braun.

As the leader of its sales team, Iwamoto is responsible for developing the non-medical home care provider’s overall sales and marketing strategy, execution, and development.

He also leads the company’s community involvement program and in 2013 was awarded the Los Angeles Business Journal Asian Business Award.

This year, 24Hr HomeCare’s growing success was recognized when it was ranked #24 among “Forbes 2014 Most Promising Companies in America.”

In 2013, WISE & Healthy Aging entered into a unique partnership with 24Hr HomeCare to form WISE HomeCare, which expanded the range of services important to area seniors that WISE & Healthy Aging can now provide. It was Iwamoto who spearheaded the productive initiative.

Prior to starting 24Hr HomeCare, Iwamoto served as the General Manager and founder of the Maxim Companion Services South Bay branch, where he earned regional sales awards and was recognized for rapidly increasing business revenue.

Born in Santa Monica and a Westside resident for more than 30 years, he holds a Bachelor of Arts degree in Sociology from the University of California Berkeley.

Monsour’s career has included high-level posts in Texas and California in a variety of fields.

These include serving as Regional Director for U.S. Senator Kay Bailey Hutchison of Texas, Vice President of Membership and Business Development for the San Antonio Hispanic Chamber of Commerce, Vice President of Strategic Partnerships for the Natural History Museum of Los Angeles County, Executive Director of the Buenanueva Foundation, Community Manager for the American Diabetes Association, Special Assistant to the Mexican Consul for Economic Affairs, and Training Coordinator for Arthur Andersen LLP.

A first generation Mexican-American, Monsour was born and raised in Los Angeles. She attended the University of Southern California, earning three degrees there: a Bachelor of Arts in Psychology as well as a Master’s and Bachelor of Science in Public Administration.

Monsour has received many honors, among them Hispanic Magazine’s Achievement Award, the Hispanic Women’s Council Woman of Promise Award, the General Motors Volunteer Award and the Free Trade Alliance SA Institutional Member of the Year.

“Ryan Iwamoto and Yesenia Monsour bring unique backgrounds, experiences and accomplishments to WISE & Healthy Aging, a great enhancement to an already distinguished Board of Directors,” said Cheng Braun. “We are very pleased that Ryan and Yesenia share our passion to serve older adults on the Westside, and have committed their time, talent and energy to guiding WISE & Healthy Aging into the future as dedicated Board members.”

For more information about WISE & Healthy, call 310.394.9871 or go to www.wiseanhealthyaging.org.