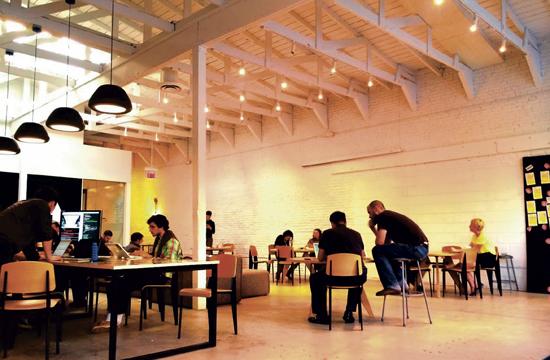 A community that offers new opportunities and career chances exists in the form of General Assembly, a Santa Monica educational institution that specializes in technology, business, and design.

With the continuing advancement of technology also comes a high demand for technical talent in the work field.

For those seeking to attain such skills in an efficient, effective, and relatively quick way in order to gain more marketability as a potential employee, General Assembly may well be the perfect fit.

Along with the rest of General Assembly’s founders and staff, Sarah Tilton, the regional director of the Los Angeles/Santa Monica branch, affectionately refers to their building as a “campus,” which frames General Assembly as a school and emphasizes its commitment to education.

The success of the school-like atmosphere is undeniable, as there are classrooms, study areas, and a small kitchen that provides meals and snacks. There is also a student lounge, which Tilton deems as “the heart and soul of General Assembly,” that was bustling with busy pupils getting seated for an interactive lecture.

The close-knit student population shares a common denominator: a genuine interest in their education.

The passion of the General Assembly students is demonstrated simply by looking at the walls of the campus, some of which are made of whiteboard material. They display the students’ hard work in equations and visuals, acting as a canvas for the brainstorming that occurs when the students have to develop their own apps for their projects.

There have even been requests to reconstruct the ceilings out of whiteboard material so that there is more room to write.

Students range from high schoolers to employees who want to shift career paths. “There are a lot of professionals who are simply wanting to level up or stay relevant,” Tilton said.

This comes as no surprise, especially in today’s rapid technological climate. What with the success of the company’s nine other national and worldwide locations, including New York, London, Hong Kong, and Sydney, Los Angeles seemed promising as a new market.

General Assembly plans on sort of studying Los Angeles and figuring out the components of its tech scene. “There is an incredible need in LA for people with hard skills,” Tilton said. “There is a shortage of technical talent.”

General Assembly originated in New York in 2011, where Tilton initially started working as an intern after hearing about the company and its educational mission from one of her college professors.

The company began as a community of entrepreneurs who wanted to share best practices and ideas. Tilton, like many of the company’s students, wanted to explore tech development and perhaps seek a career change.

There are a variety of classes available for people at all stages in life, including part-time and full-time courses as well as one-time classes and workshops.

The part-time courses are ideal for those who seek to keep their day job and tack on some useful evening classes.

Students or employees who commute often use the classes as a fun excuse to make a night out of the trip to Santa Monica, grabbing dinner or a movie before or afterward.

For those who can commit a bit more time out of their schedule and are seeking more of a career change, the full-time, immersive 8-to-12 week courses from 9 am to 5 pm every weekday would be the choice to opt for. Though this option requires more dedication, the immersive courses will function much like a school class schedule and will naturally result in heftier learning outcomes.

General Assembly explores an even more extensive diversity of topics in its offered classes, from a simple Intro to Photoshop class to a more substantive product management course.

An old-school style apprentice program is available as well so that students can get a better idea of what they want in regards to their future jobs.

Class prices can range from free to a few thousand dollars, depending on the subject matter.

Currently, there is an even mix of part-time and full-time students, with a versatile age range as well.

The students usually range from 25 years old to 44 years old, with the oldest student thus far being 87 – and also serving as the landlord of General Assembly’s property.

Many want to learn to code so that they can later seek relevant entry-level jobs, while others may simply want to “dabble in HTML or CSS.”

Students of virtually any level can enroll, but there is a certain level of capability needed, depending on the type of class that is taken. There is a requirement of a high school degree, as well as participation in an interview process.

Another prerequisite is the completion of Dash, an online platform that teaches basic web development, which requires 12-16 hours of pre-work.

Dash is also available to anyone with Internet access who is interested in learning standard tech skills.

Among the students at the Santa Monica location, there is currently a 100 percent employment rate of WDI graduates within three months of class completion of the corresponding WDI course.

It is clear that the educational mission of General Assembly has been nothing short of absolutely successful.