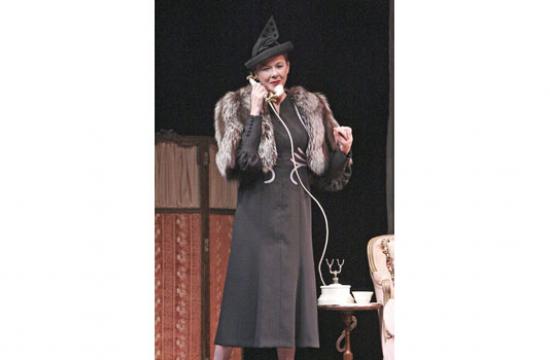 For those of you who might be wondering who is Ruth Draper and why is she being channeled by Annette Bening, in “Ruth Draper’s Monologues,” currently on stage at The Geffen Playhouse, the answer is simple.

Ruth Draper led the way in 20th Century drama and was referred to as “the greatest individual performer that America has ever given us.”

Her forte was character-driven monologues and monodrama,* and being one of America’s finest actresses, Annette Bening is the perfect artist to interpret and perform Draper’s works that are as timely today as they were when they written by the gifted writer/actress, who so deftly shined a light on universal fads and foibles of the human condition.

Draper was born into an aristocratic New York family in 1884 and at a very young age demonstrated her gift for creating different characters based on the people to whom she was exposed.

Despite the social mores, which frowned upon a theatrical career, following performing in the parlors of upper crust gentry such as Mrs. Franklin Roosevelt, Mrs. Waldorf Astor, Mrs. Jon Astor, and Mrs. Felix Warburg,  Draper’s talent was too big to be confined to drawing room performances.   Eventually, her family moved to Germany and then to England where she was besieged with invitations, including a command performance for King George V and Queen Mary, and soon became the toast of London.

Twenty-five years later, she performed for King George VI who awarded her with membership in the Order of the British Empire with the rank of Commander.

Following World War 1, Draper finally made her Broadway debut as the social mores had changed and it was no longer frowned upon for an upper class woman to pursue a theatrical career.

Her sets were generally quite sparse, performing with just a table, chair, and a simple shawl as her only props.

She successfully entertained audiences for almost forty years, capable of delivering her monologues in a half dozen languages.

“Ruth Draper’s Monologues” consists of four of Draper’s classic pieces that she created from the privileged world she inhabited, and in a theatrically exciting performance, Bening crawls deeply into the skin of the different characters she portrays.

The first sketch is “A Class in Greek Poise,” wherein the character is conducting an exercise class for society women, most of whom tip the scales at over 200 pounds.

Dressed in a white toga, Bening, in keeping with the tradition of that time period, refers to some of the unseen participants as Mrs. Carpenter, Mrs. Jefferson, and Mrs. Foster, and in a playful, fun manner instructs them in a series of exercises designed to encourage weight loss, uttering such gems as “These bodies are the home of our souls.”

A most physically agile Bening takes her class through an assortment of stretches and prances and, as she deftly accomplishes in all of the sketches, fills the stage with myriad unseen characters who become so real, you can almost actually seem them and in this case, in their green bloomers and bathing attire.

The second amusing monologue is “A Debutante at a Dance.”  Bening makes a quick costume change in a dressing area set up on stage left and emerges as a young debutante in a flapper dress.

Endowing her new character with distinctly different physical and vocal characteristics, Bening’s young girl ruminates about life, the importance of character and thinking, confessing that she does think a lot and, “In fact, I think all the time.”

The third sketch “Doctors and Diets” could have been ripped from a Beverly Hills playbook where just about everyone is on a diet and brings to mind the classic scene from Henry Jaglom’s “Eating,” where a piece of cake is passed around a circle of about ten women and there are no takers.

In Draper’s hilarious sequence, these are upper crust women who are lunching at a swanky New York restaurant.

Now adorned in a suit and a hat with a long protruding feather, Bening’s Mrs. Grimmer is waiting for her friends to join her for lunch.

After a slight confrontation with the maître d’, in a most lady-like manner regarding the reservation, one by one the guests begin to arrive.

After all the unseen friends are seated, Mrs. Grimmer announces that she is not going to eat but assures her friends that she is fine with them ordering lunch.

However, each of the ladies reveal that they, too, are dieting and the orders range from one boiled turnip, which is said to “bring clarity to the brain,” a serving of a bunch raw carrots, lemon juice made from eleven lemons, and what can only be defined as an act of defiance, Mrs. Grimmer orders two chocolate éclairs.

As often happens when you put a number of ladies together, the gossip mill begins and through Mrs. Grimmer, we hear delicious tidbits ranging from who’s getting a divorce, to who has the best doctor, to whose spouse is being unfaithful.

Shifting her focus ever now and then, Mrs. Grimmer greets other imaginary patrons as they pass by her table sending her regards, hellos, and compliments on their hats. So vivid are these unseen characters, you can almost feel them as they sweep pass her table.

After a quick costume change into a pink satin dressing gown adorned with feathers, Bening now plays an over- extended socialite in “The Italian Lesson.”

With the help of a tutor, she is studying Dante’s “Inferno” and takes it upon herself to translate the text into easier to understand sentences.

This is probably the most chaotic, complex, and the longest of the four monologues, as the playwright has yet again created an assortment of characters with whom the actress must interact.

There’s the tutor, her daughter Barbara who keeps interrupting her, the younger children, one of whom seems to be in the waste paper basket, the manicurist, Jane the cook, to whom Bening’s character imparts a long, complicated recipe.

There is a telephone conversation with her husband Hubert who needs one of the children to bring his golf driver over to the railway station at precise time, as well as some other interesting telephone conversations, one with her son’s math teacher who she informs that arithmetic is making her son nervous and there was no reason for him continuing in his lessons.

There’s also a puppy that she names Dante or Dan for short and there’s her secretary Miss Swift who must try to keep up with her employer’s incredibly jammed schedule.

There is also an amusing conversation with an artist who has just painted a portrait of her daughter and she gently offers a few suggestions. “Could you make the ribbon in her hair blue and paint her as though she were hot.”

There are committee and board meetings to attend, book clubs and yes, a funeral and in one phone conversation, she says, “Don’t make me laugh. I’m on my way to a funeral.”

Then we hear a mysterious phone conversation with someone that causes the character to lower her voice almost to a whisper as well as assuming a different physical dynamic.

Draper really captures the reality of over-extended society women from her era, but any woman who tries to combine career with that of wife and mother, along with carpooling, sitting on committees, and supporting charity events, will fully relate to this frenzied character if not fully, but certainly in part.

Although the clothing, manners, and mannerisms have changed throughout the centuries, the one aspect that remains constant is the human condition.

Bening, who also directed herself, accomplishes a theatrically commanding tour-de-force, crafting a multitude of living, breathing unseen characters who crowd the stage and were the groundbreaking Miss Draper alive today, she would have been most pleased with what took place on the Geffen Playhouse stage.

*(A theatrical or operatic piece played by a single actor or singer.)