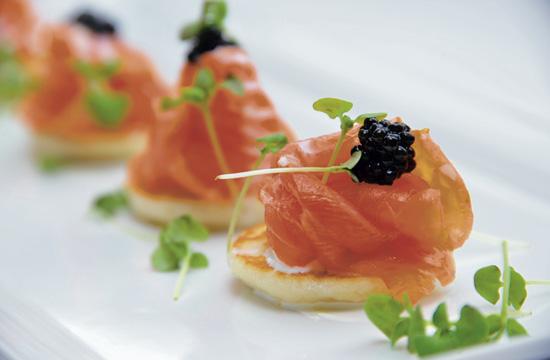 With the changing of the season, Café del Rey executive chef Chuck Abair is in the midst of transitioning his menu at the Marina del Rey waterfront restaurant from winter to spring.

Abair, who joined the restaurant three years ago as Chef du Cuisine, was promoted seven months ago when former executive chef Daniel Roberts left the establishment.

With his focus on creative presentations of the area’s best seafood, such as his house-cured salmon, along with a focus on making pantry staples such as pasta and bread from scratch, his menu sets the mood for sophisticated yet relaxed marina dining.

“I strongly believe strongly in the interplay of local ingredients and sustainable seafood,” he said. “For me, it’s about exceeding guests’ expectations, making as much in-house as possible, and providing a dining experience that suits the spectacular location.”

Abair brings his seafood-driven background to the restaurant, crafting seasonal menus that focus on the flavors of the French and Italian Riviera with accents from throughout the Mediterranean region.

“Being in California it’s pretty much beautiful all year round,” Abair said. “Right now we are doing a Steelhead with a fun play on peas and carrots. We’re also doing a pan roasted salmon with a corn, fava beans, red bell peppers, green zucchini, and red onions.”

“Sometimes they just happen,” he said. “Or sometimes myself and my Chef du Cusine and others have to keep brainstorming on an initial idea. Sometimes things don’t go on the plate as you imagine in your head. A lot of times it starts with an idea whether you are walking through the farmers market or grocery store. The idea pops into your head like a light bulb turning on, which is usually something fun that you want to try or play around with.”

Abair said his menu always features a “Sustainable Pick of the Day” special.

“We try and rotate that as much as possible with whatever is current and whatever our suppliers have got going on,” he said. “Our seafood company does a great job sourcing what’s being pulled out the water.”

A Southern California native, Abair first learned to cook in his grandmother’s kitchen. With the encouragement from his family, he set out to become a chef by earning a degree from the California School of Culinary Arts, Le Cordon Bleu, Los Angeles.

After graduating from culinary school, Abair worked in a number of restaurants throughout Los Angeles including the Viceroy Hotel, Anisette, and Westside Tavern.

He also worked alongside Chef Michael Cimarusti at Water Grill and followed him to Providence to take on the role of sous chef.

There, Abair not only helped the restaurant earn a Michelin star, but he also developed his love for creatively showcasing seafood.

He said the best part of his new position at Café del Rey was the ability to use whatever ingredients he wanted as long the dishes stayed within the brand.

“Café del Rey really let’s us have that vehicle,” he said. “In California, we have the great views. it’s a really beautiful restaurant, and it’s fun to be creative here.”

It is located at 4451 Admiralty Way, Marina del Rey.