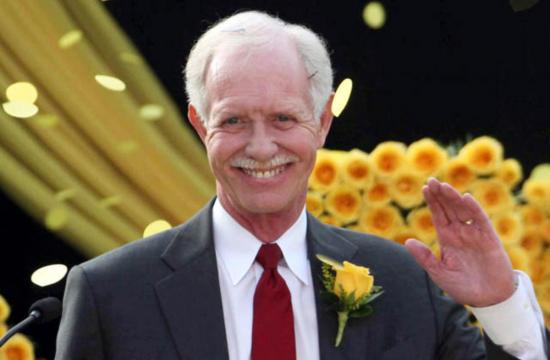 Captain Chesley B. (“Sully”) Sullenberger, the pilot who safely landed the US Airways jet on New York City’s Hudson River, in the incident that became known as “The Miracle on the Hudson” will be honored at the 8th Annual American Red Cross Red Tie Affair in Santa Monica this Saturday night.

The coaches and executive producers of the Emmy Award-winning show “The Voice” will also be honored at the event, which will be hosted by Fox 11 News anchor/reporter Christine Devine.

Festivities will begin with red carpet arrivals at 5:30 pm at the Fairmont Miramar Hotel.

The Crystal Cross Award for Outstanding support of the American Red Cross will be presented to “The Voice.”

The popular singing competition, which is broadcast on NBC, is hosted by PrepareSantaMonica honorary chair Carson Daly, who is also a producer on the show. Cast members from the NBC show “Grimm” will also be on hand to support their “The Voice” colleagues.

The Spirit of the Red Cross Award awarded to the individual(s) who best exemplify the values of humanitarianism, will be presented to Captain Chesley B. (“Sully”) Sullenberger, who safely landed his crippled US Airways jet in the Hudson River five years ago to save 155 passengers and crew. Sullenberger is currently a CBS News analyst.

The Rick Crocker Spirit of Volunteerism Award, which is named for the Santa Monica police officer, Red Cross volunteer and Iraqi war veteran who died in 2005, will be presented to the UCLA People Animal Connection, a therapy dog program by the Ford Motor Company Fund and Southern California Ford Dealers.

Funds raised are transformed into services delivers every day to the community.

Local military, government, corporate and community leaders will join together in an inspirational evening, including silent and live auctions, which support the programs of the American Red Cross in Santa Monica and the Los Angeles Region.

Wearing an element of red is encouraged to signify support of the American Red Cross mission.

The evening’s festivities evening will include cocktails and gourmet dining from celebrity chef Nick Stellino.