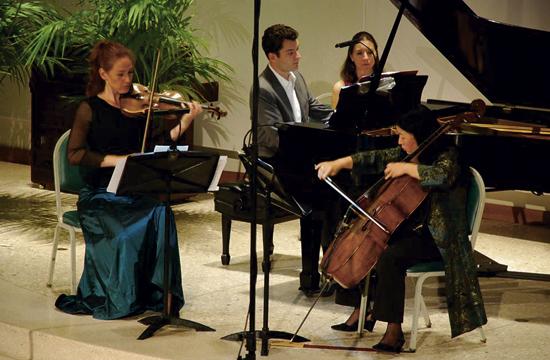 This Saturday night, Jacaranda will perform “The Knee Plays” by David Byrne, the famed driving force of the “art rock” band the Talking Heads at the First Presbyterian Church of Santa Monica.

Jacaranda, with the motto of “music at the edge,” is a series of intimate concert adventures into the realm of new and rarely heard classical music designed to awaken curiosity, passion, and discovery in diverse audiences.

“The Knee Plays” was conceived as a set of 14 short interludes between sections of the opera to span an entire day.

Jacaranda’s offering of the entire set, which Byrne toured widely and recorded, will complement the L.A. Phil’s two performances of the opera’s “Rome Section” by Philip Glass.

Together, they constitute the only two completed parts of “the CIVIL warS” – united in Los Angeles for the first time ever.”

Actor Fran Kranz will narrate Jacaranda’s presentation. A rising actor in film (“Cabin in the Woods,” “Much Ado About Nothing”) and television (“The Good Wife,” “Bad Sports”), Kranz appeared in director Mike Nichols’ Broadway production of “Death of a Salesman” with the late Philip Seymour Hoffman.

In 2014 Kranz will share the big screen with Niki Reed, Greg Kinnear, and Blythe Danner.

“Super exciting that this music is being performed again,” Byrne told Jacaranda’s Artistic Director Patrick Scott, “and in LA where it was originally supposed to be presented. The music is a mix of original compositions and brass transcriptions of choral folk music from different places. The little stories that make up most of the narration are personal and for the most part plausible. The brass was intended to cover the noise of the sets being changed and the narration really has nothing directly to do with [the opera’s story] though one is free to make connections of one’s own.

Byrne said this piece was originally conceived to be a series of little play-lets that would happen downstage of a large curtain.

“They’d occur as the big bits of scenery for the larger acts of the Civil Wars piece were being changed,” he said. “All together they visually told a story, a kind of myth involving a tree that becomes a boat, travels to a far off land and a book that turns back into the tree. The sets looked like Sol Le Witt sculptures and the movement was choreographed by the late Suzushi Hanayagi originally. Those visual elements happened in silence.”

The Jacaranda program will open with works by Philip Glass: “Mad Rush,” an elaborate organ piece performed for the exiled Dalai Lama’s first public visit to New York City in 1981, and a suite from the soundtrack to the 1985 film “Mishima.”

Mark Alan Hilt performed “Mad Rush” on Jacaranda’s first concert, and it is included as a nod to Jacaranda’s 10th anniversary.

The concert this Saturday, April 5 will be held at 8 p.m.

The First Presbyterian Church of Santa Monica is located at1220 2nd Street in Santa Monica.