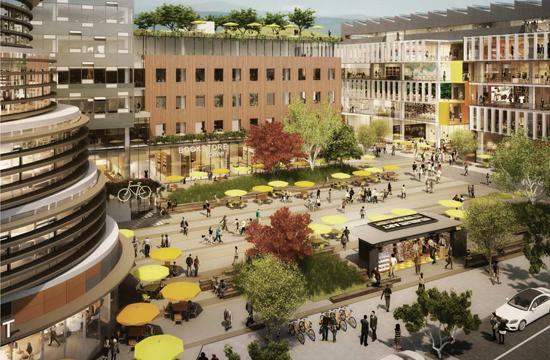 The next chapter written in the Hines development agreement (DA) saga was more of the administrative nature, as the Santa Monica City Council acknowledged on Tuesday a resident petition seeking to overturn a multi-use project approved to be built at the former Papermate site at 1681 26th Street.

Council members unanimously voted to receive and file the petition, meaning the ordinance authorizing the Hines DA would remain suspended until a final decision on the matter is made.

At the suggestion of City Manager Rod Gould, May 13 was the date set when they will deliberate how to move forward with the referendum.

The council’s next regularly scheduled public meeting happens to be May 13.

At the May 13 meeting, council members will decide whether to place the Hines project on the ballot or “reconsider and repeal” the ordinance.

The bill for a special election could cost City Hall about $200,000, according to City Clerk Sarah Gorman. However, Gorman added should the council decide to place the Hines DA on the November ballot, the cost to the City could only be about $5,000.

If the council decides to present the referendum to the entire Santa Monica electorate, an election could be scheduled anytime between Aug. 10 and Nov. 4.

A total of 15,512 signatures were reportedly gathered, according to Gorman. However, Gorman told the council once about 6,800 petitions were officially verified, the County registrar did not continue verifying any more petitions.

The roughly 6,800 verified signatures represent 10 percent of Santa Monica’s registered voters. Referendum organizers only needed to meet that 10 percent threshold in order to have the petition validated by County officials.

Once County officials verified there were enough signatures attached to the petition, the matter moved back to the City Council, where the next administrative step was taken April 22.

Council member Tony Vazquez asked the City Clerk what percentage of petitions or signatures were discarded. However, Gorman did not immediately have that information available.

“Over 10,000 people thought the decision the majority of this council made needed to be reconsidered,” Council member Kevin McKeown stated. “I can’t think of anything more Santa Monica than 10,000 residents getting together to let this council know that a decision is not what they want. That’s what democracy is all about.”

Mayor Pam O’Connor said while the efforts of Residocracy.org and other community groups in collecting signatures were commendable, there were still a significant number of voices that still needed to be heard.

“It’s wonderful that [more than] 10,000 people signed [the referendum]. That means there are 45,000 other registered voters in Santa Monica who have not weighed in on this yet,” O’Connor stated. “We will see where we go on this in the future.”

Residocracy.org and its founder, Armen Melkonians, spearheaded the referendum petition campaign to challenge the Hines DA narrowly approved by council members in February.

Community members and signature gatherers were able to collect sufficient signatures by mid-March.

In February, four of seven council members – Pam O’Connor, Terry O’Day, Bob Holbrook, and Gleam Davis – voted in favor of approving a five-building commercial, creative, and residential space to the intersection of Olympic Boulevard and 26th Street. The project’s plans proposed to add about 765,000 square feet of building to the area.