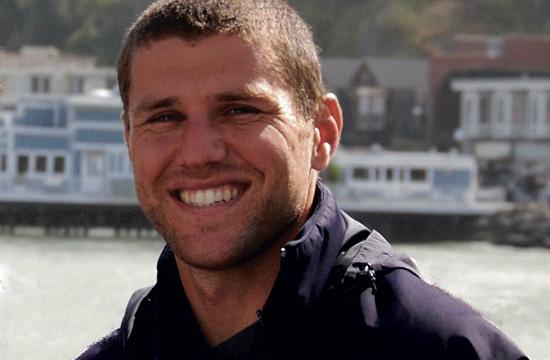 A standing-room-only remembrance was held Sunday, April 6 at Lincoln Middle School to honor the life of James Scott “Jimmy” Bromberg, a Santa Monica native who died March 29 after fighting cancer. He was 28.

According to an obituary, Bromberg was surround by his wife Amara, parents Ken and Carol, and brothers Eric and Michael when he passed during the early morning hours of March 29.

He met his to-be wife while playing a middle school football game. Both tied the knot November 2013 in a small ceremony.

Both Bromberg and Amara attended college together at the University of Washington, where he majored in History and Sociology and minored in Political Science. In 2011, Bromberg obtained his teaching credentials from Cal State Long Beach and returned to Lincoln Middle School to teach history and math.

According to Bromberg’s obituary, he also completed the Professional Screenwriting Program at UCLA and penned action-adventures, biopics, and romantic comedies.

One of his scripts was made into a film. Bromberg and his brother Eric co-wrote “Enemies Closer,” an action-thriller that was released Jan. 24, 2014, and starred Jean-Claude Van Damme and Orlando Jones.

Suzanne Webb, the Lincoln Middle School principal who spoke at the remembrance, said Bromberg maintained the highest level of positivity in the face of adversity.

When Bromberg informed the school and his students of his cancer in January 2013, Webb said the man she initially hired as a lifeguard and then later as a substitute instructor refused to have a replacement fill in for him.

“When he told me he had cancer, I asked if he wanted me to find a replacement for him. He said, ‘No, I want to stay here and continue teaching. I love Lincoln, I love my students and my colleagues. You all make me so happy. I just need your help telling the students because I will lose my hair soon and I don’t want to upset them,’” Webb stated during her remarks. “So, the next day, I was with him in all his classes when he told his students. He was honest, matter of fact and positive. One of his seventh graders, who was a challenging student, volunteered to shave his hair in solidarity. That’s the kind of impact Jimmy had on his students.”

Bromberg did not allow a rare form of cancer to bring his spirits down, one of his brothers was quoted as saying during the weekend remembrance.

“In the end, Jimmy specifically told me while in his hospital bed how important it was to him that everyone know just how much he fought, because he very much had a life worth fighting for. He wanted us to know that he’d left it all on the field… as he always had, every single time he suited up,” brother Eric Bromberg said at the weekend remembrance.

Childhood friend Jack Ross said Bromberg truly was a “Man of the People.”

“Pure and simple, the guy supremely loved people, and the simple human experiences we share. In that same spirit, he deeply loved anything that brought people together, as many as possible – and at one time, preferably – united for a common purpose,” Ross said at the remembrance.

Bromberg’s obituary stated he continued to draft his scripts while in the hospital and teaching classes in between chemotherapy treatments.

In addition to teaching and writing scripts, Bromberg also played sports at Lincoln Middle School and Samohi. He was a starter on the Samohi varsity football and track and field teams, according to his obituary.

Bromberg’s family asks in lieu of any flowers sent to commemorate his life, support could instead consider making a contribution to the Santa Monica-Malibu Education Foundation (SMMEF).

Visit JimmyBrombergFund.com for information on how to contribute to the SMMEF on Bromberg’s behalf.