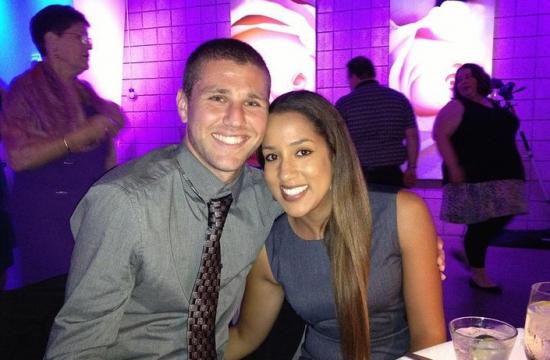 James Scott (Jimmy) Bromberg, 28, died in the early morning hours of March 29, 2014 after a long and courageous battle with cancer.

Today he will be remembered by friends, family, fellow teachers, and students at Lincoln Middle School.

He was surrounded by his loving and devoted wife, Amara, his parents, Ken and Carol, and brothers, Eric and Michael. Jimmy was born on December 19, 1985 in Santa Monica.

He grew up running and playing on the grassy fields of Franklin Elementary School, Lincoln Middle School, and Santa Monica High School.

An all-star athlete in every sport throughout his youth, Jimmy earned a starting position on both the varsity football and track & field teams.

Not surprisingly, Jimmy was voted by his fellow students as “Most Athletic” in both his middle and high school yearbooks.

Fittingly, Jimmy met the love of his life, Amara Russell, while playing quarterback on opposite teams during a middle school football game. She was his first and only girlfriend.

Kindred spirits from the start and best friends until the end, Jimmy and Amara were married in a small ceremony in November 2013.

Jimmy attended the University of Washington with Amara, where he became a resident advisor in the dorms and a mentor for local under-served high school students.

He graduated early, with a double major in History and Sociology, a minor in Political Science, and a lifelong devotion to the Washington Huskies.

After obtaining his teaching credential from Cal State University Long Beach in 2011, he taught history and math at his alma mater, Lincoln Middle School.

Beloved by both students and fellow teachers, Jimmy made ancient civilizations and algebraic equations come alive with his engaging and encouraging style of instruction.

Jimmy was recognized by multiple contests for his writing talent, culminating in the 2014 world-wide release of the movie Enemies Closer (co-written with his brother) starring movie icon Jean Claude Van Damme. Jimmy loved spending time with family. From age five, he and his brothers attended the University of Michigan family camp with Aunt Binnie, Uncle Harvey, and numerous cousins.

At Schriver family reunions he visited many of America’s wonders, including the Grand Canyon, where the boys hiked to the bottom and back in a single day, just in time for dinner.

Holidays always meant epic Turkey and Christmas Bowl games, while family trips inevitably included competitive activities like racing to the top of an ancient Mayan pyramid in Guatemala, swimming out beyond the buoys in Hawaii, and cart racing down a mountain in Purgatory, Colorado.

Jimmy treasured spending time with the many friends he made throughout his life. Whether playing pick-up basketball, catching a late night movie, or just bantering with a game on in the background, there was a joyful and genuine camaraderie among his friends, and Jimmy cherished it immensely.

Feeling fortunate for all his blessings, Jimmy cared deeply about others receiving an equally fair shot in life, and ultimately favored the underdog¿no matter the subject or the odds.

He constantly utilized his love of statistics to support arguments in favor of helping the disadvantaged.

He could converse intelligently about most anything, but it was his ability to listen to others and his thoughtfulness that distinguished him – as a son, a brother, a friend, a husband, a writer, and a teacher to many.

With never a bad word to say about anyone, Jimmy possessed an unconditional kindness and generosity that made him wise beyond his years and wealthy beyond his means.

Over the past year Jimmy remained the man he always had been, with his warm and winning spirit and his absolutely infectious smile.

Even in the darkest hours he maintained an unshakeable positivity, teaching classes between chemo treatments, re-writing script pages from his hospital bed, doing exactly what he loved surrounded by the people who loved him most.

Throughout his 28 life-packed years, Jimmy achieved a rich and meaningful existence, earning the respect and love of his many close family members and friends.

He will live in our hearts and minds, always.

Jimmy is predeceased by his grandparents, Hedy and Robert Bromberg and Donald Schriver. He is survived by his wife, Amara, parents, Carol and Ken, brothers, Eric and Michael, grandmother, Shirley Schriver, the Russell family – Tony, Linda and Anika, aunts and uncles; Robin (Binnie) and Harvey Wax, Janice and Barry Kuntz, David and Gail Schriver; numerous cousins, second cousins and extended Bromberg, Schriver and Russell family members, and his beloved friends.

A memorial service for Jimmy will be held at Lincoln Middle School Auditorium, 1501 California Ave. Santa Monica, CA 90403 on Sunday, April 6 at noon.

In lieu of flowers, the family asks that you consider a contribution to the Santa Monica-Malibu Education Foundation, 1645 16th St. Santa Monica, CA 90404 (please write “Jimmy Bromberg” in the memo line) or visit JimmyBrombergFund.com.