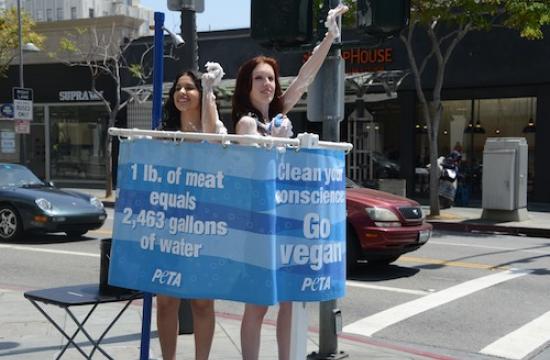 Two naked PETA (People for the Ethical Treatment of Animals) advocates stood behind a banner that read “Go Vegan! 1 lb. of Meat Equals 6 Months of Showers” on Tuesday in Santa Monica in honor of Earth Day.

The advocates were at the intersection of Santa Monica Boulevard and Third Street Promenade starting at noon.

“Between sucking up water at an alarming rate and polluting the soil, water, and air, the meat industry is as toxic to the Earth as it is to human health,” said PETA advocate Meggan Anderson. “PETA wants Americans to know that each of us can personally save precious resources—and animals—simply by going vegan.”

According to PETA, California dedicates about 80 percent of its water to agriculture.

“Although the average amount of water needed to produce a ton of vegetables is approximately 85,000 gallons, it takes about 4 million gallons of water to produce a ton of meat,” a statement from PETA read. “Meat’s threat to the water supply is becoming a crisis for California.”