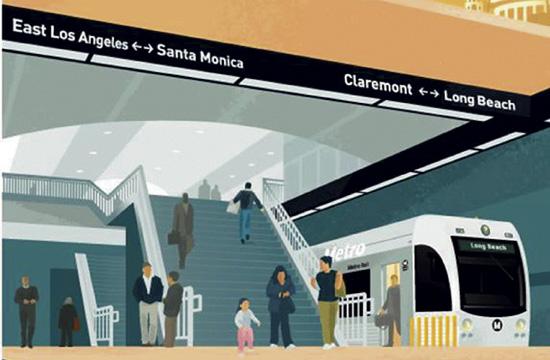 The design/build contract is estimated to be worth $927.2 million, according to a Metro staff report.

Metro staff recommended the funding be awarded to Regional Connector Constructors, which is a joint venture between Skanksa USA Civil West California and Traylor Bros.

Skanksa is the same company working on Phase 2 of the Expo Line in Santa Monica.

Forecast by Metro staff to be complete by September 2020, the Regional Connector would be a 1.9-mile underground rail connecting the Gold Line to the Blue and Expo lines, allowing trains to travel directly from Santa Monica to East Los Angeles (or Azusa to Long Beach) without making multiple transfers in downtown Los Angeles.

A Metro staff report stated the entirely underground Regional Connector would begin at the Seventh Street/Metro Center station in downtown Los Angeles, head north to Second Street at Hope Street where it would then turn east toward Second Street and Central Avenue. At that intersection, the underground rail would then cross under First and Alameda streets before splitting up, with one line heading north toward the existing Gold Line stop at Union Station and the other heading east to connect with the Gold Line tracks heading toward East Los Angeles.

Metro staff indicated the Regional Connector would add three new underground stations in the downtown area: Second and Hope; Second and Broadway; and, First and Central.

Based upon current ridership, Metro staff stated it anticipates almost 59,000 daily trips on the Regional Connector.

Once the Expo Line begins full operations in 2016, a Metro rider starting from Santa Monica who wants to travel to any points along the Gold Line toward East Los Angeles would have to make two transfers in downtown Los Angeles.

First, the Expo Line rider would have to travel from Santa Monica to the Seventh Street/Metro Center station in downtown Los Angeles. Once there, the rider would then have to switch to the Red Line heading toward its terminus at Union Station.

At Union Station, the rider would once again have to make a switch to the Gold Line, the platform of which is not directly connected to the Red Line’s Union Station stop.

The Regional Connector would eliminate those transfers.

Similarly, Blue Line riders would be able to directly connect with the Gold Line’s Azusa route via the Regional Connector. The Gold Line currently ends at the Sierra Madre Villa just east of Pasadena. However, the Foothill Extension would add six more stops heading east, including stations in Arcadia, Monrovia, Duarte, Irwindale, and Azusa.

According to Metro, the Regional Connector project is partially funded by Measure R, a half-cent sales tax increase that was approved by voters across Los Angeles County in 2008.

There are still at least two steps remaining in the decision-making process. The Metro Board of Directors considered the matter at an April 18 construction committee meeting at Union Station. Come April 24, the entire Metro Board is set to weigh in on the contract recommendation. The meeting will be at 9:30 am next Thursday at the Metro headquarters by Union Station.