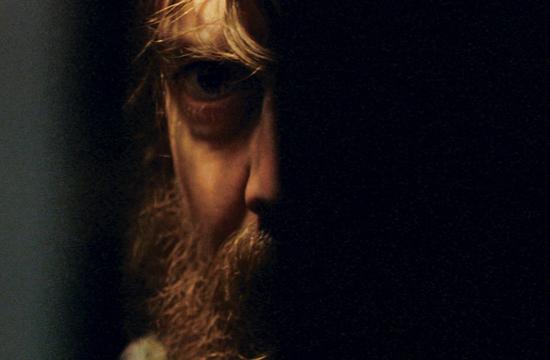 Violent family feuds are part and parcel of Americana, the most notorious one being between The Hatfields and The McCoys, which began in 1865 and resulted in around one dozen deaths.

Eventually a truce was declared and in 1979 members of both clans appeared on “Family Feud” for a big shoot-out, only this time using blanks.

Jeremy Saulnier’s “Blue Ruin,” is a variation on the theme of revenge killings.  Most of the story centers around Dwight Evans (“Macon Blair”), an unkempt vagrant living on the streets of eastern Delaware, getting his meals out of garbage cans.

Perhaps the trauma of seeing his father killed caused him to drop out and live a life isolated from family and friends.

He finds out that the man who was sent to prison for killing his father was being released from prison and worrying about the fate of his sister and her children, he literally cleans up his act and heads back to his hometown.

Revenge is on his mind and although soft-spoken and sometimes having the look of a deer frozen by headlights, he plans his revenge.

He is not quick witted and has difficulty in putting sentences together but despite what looks like moments of equivocation, he proceeds with the revenge killings with a lose/lose bloody finality.

Blair gives a fascinating portrayal of a man pushed into violent action and with limited dialogue, his characterization is spot on as the tormented, but determined Dwight.

This is a fascinating, slow moving, moody, textured film with Saulonier’s camera work capturing the sometimes real as well as almost surreal landscapes in which Blair moves.

Release Date: April 25 and On Demand