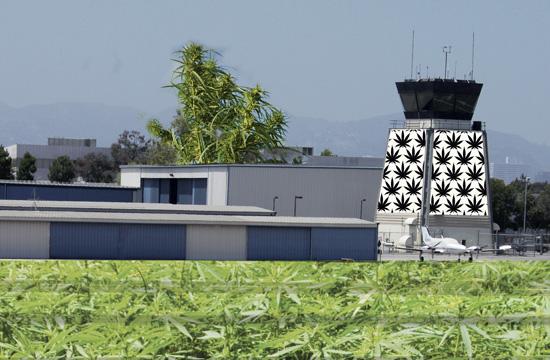 Santa Monica Airport (SMO) has always been a place to get elevated. By the end of 2015, people won’t have to ride an aircraft to arrive in the clouds. Instead, anyone visiting the airfield next year will only have to bring a piece of paper and a lighter as SMO will be converted into the Great Park of Marijuana.

Plans for the park were announced during an emergency City Council meeting held last night in a friendship circle underneath the Santa Monica Pier.

The meeting was held less than a week after the same council convened at City Hall.

During the March 25 meeting, a heated discussion about the future of SMO appeared to be reaching an impasse when a member of local marijuana group suggested holding a “Summit by the Sea” to find an amicable resolution for all involved parties.

Council members unanimously approved plans to shut down the entire airport and adopting the “Up In SMOke” recommendation by the City’s lead planner, Dean Martini.

“Are you anywhere?” Mayor Bram O’Stoner colloquially asked once the final vote was lodged.

A second reading of the Up In SMOke plan is scheduled for April 20 at 4:20 am.

As part of the plan, the region’s leading Congressman, Barry Flax Mango, will spearhead the 28th Amendment to the United States Constitution. The amendment would make marijuana legal in all 50 states and the District of Columbia.

Locally, the first order of business would be to change SMO’s name. The airfield would be known as the Great Park of Marijuana by Dec. 31, 2015.

Split during the March 25 meeting of how best to grapple with the future of SMO, the council was finally turned in favor of converting the airport into a vast playground for Aunt Mary when Marilyn Manson shared an anecdotal story of how he and another famous musician could help spread the word about the Great Park of Marijuana.

“I talked to Snoop Doggy Dogg today. Well I’m not sure if you could really call it ‘talked’ because I could hardly understand what he was saying. But I think what he was trying to communicate was that he wanted to work with me in some sort of capacity and something involving marijuana,” Manson told the council as he was applying some black makeup to his left earlobe.

With the vote, City staff will now work with the Drug Policy Alliance, Cannabis Culture, National Cannabis Coalition, and Students for Sensible Drug Policy in designing the Great Park of Marijuana.

At the same time, City Hall will be negotiating with the Federal Flying Board to repeal any and all agreements governing SMO. While discussions have yet to take place, aviation industry insiders and pot heads alike believe Santa Monica will be given complete ownership of the airport land in exchange for giving the Feds a piece of the action.