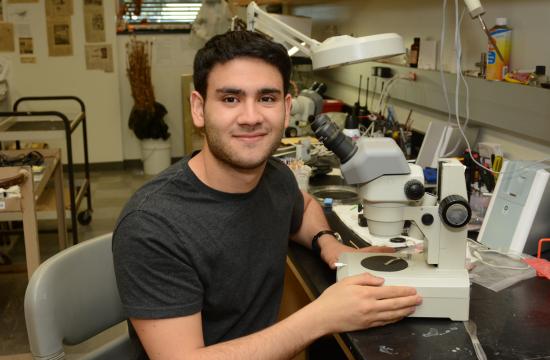 For the second year in a row – and marking the third time in four years – a Santa Monica College student has been awarded a prestigious Jack Kent Cooke Foundation (JKCF) Undergraduate Transfer Scholarship, the nation’s largest private scholarship for community college transfer students.

This year’s recipient, Siamak Khakshoor-Kohan, is one of 85 students chosen from 3,705 students from 737 community colleges.

JKCF winners – chosen by a highly respected selection committee of 18 admissions professionals, mostly from selective four-year institutions – receive up to $30,000 a year for up to three years to complete their Bachelor’s degree at accredited four-year colleges or universities.

“The Jack Kent Cooke award will allow Siamak to realize his dream of becoming a caring physician for those in need,” said SMC President Dr. Chui L. Tsang. “His success is one that mirrors what America is about: hard work and opportunity.”

JKCF Scholarship winners are chosen for their “high academic ability and achievements, financial need, persistence, leadership, and a desire to help others,” according to the Foundation, which was started in 2000.

A pre-med student at SMC, Khakshoor-Kohan is one of four children raised by Jewish immigrants from Iran.

“As I see them working every day of the week to save for our future, my parents are still an inspiration to me,” Khakshoor-Kohan said. “They taught me the importance of leading an honorable life centered on higher education and service to society.”

Khakshoor-Kohan is familiar with the idea of embarking on a career in healthcare. His older sister is a dentist, his brother is a radiology resident, and his younger sister is currently working on her Master’s degree in biomedical sciences.

“The vision of one day healing my own patients because of higher education now beckons me to pursue my own path in healthcare,” Khakshoor-Kohan said. “My family’s humble immigrant background has helped me to have greater understanding and compassion for patients of diverse backgrounds.”

“Siamak has the essential combination of motivation, intellectual curiosity, and compassion to reach his goal of a career in the medical field,” said Colavito, who by coincidence has also been an instructor for all three of Khakshoor-Kohan’s siblings.

Khakshoor-Kohan is a longtime healthcare volunteer and – through the honor society Alpha Gamma Sigma – has been the recipient of the President’s Volunteer Service Award from the President’s Council on Service and Civic Participation, established in 2003 to recognize the valuable contributions volunteers are making in the nation’s communities, and to encourage more people to serve.

“When I was in high school, I was a volunteer at Ronald Reagan UCLA Medical Center in Westwood and worked as a patient escort,” Khakshoor-Kohan said. “One day, my friend and I were helping discharge an elderly lady in chronic pain. She pointed to a window and said, ‘That’s a good place to jump.’ We were speechless, but that’s when I realized how important it was to connect and communicate with patients on a personal level.”

For the past six months, Khakshoor-Kohan has been a volunteer at UCLA Medical Center, Santa Monica, where his attention is focused on supporting nurses caring for ICU patients.

Khakshoor-Kohan, a member of SMC’s academically rigorous Scholars Program, has been accepted as a transfer student from SMC to UC Santa Barbara, and is still waiting to hear from UCLA, University of Southern California (USC), and Stanford University.

“I still haven’t made up my mind about where I want to continue my studies,” he said.