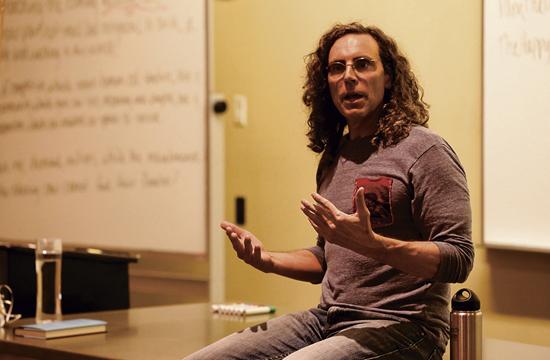 Community. Cooperation. Connectivity. Simplicity. Authenticity. These five words were written largely on the whiteboard in the auditorium at Santa Monica College on the evening of March 25.

The purpose of these five words was to sum up the values of guest speaker Tom Shadyac.

However, for Santa Monica College students and other audience members, the evening’s event was not about comedy or getting the latest scoop on Shadyac’s next Hollywood project.

The evening was a spirit of inquiry into Shadyac’s experiences, values, and opinions on a variety of human topics he presents in novel and in his documentary, “I Am.”

In 2007, Shadyac suffered post-concussion syndrome after a bicycling accident.

It was during this time of physical and mental pain and suffering, Shadyac awoken to a new perspective on life and sought to explore the answers to two very profound questions: “What’s wrong with world?” and “What can we do about it?”

He shares all his findings along with his personal perspective in his novel and documents his journey in his film.  Shadyac wants to share with the world his views and learn what others are thinking.

He’s so genuinely curious and open to other perspectives and opinions, especially that of young adults, that he excitedly accepts the invitation from the Santa Monica College English and Business Departments to speak each year.

This evening marks his fourth time at Santa Monica College. Shadyac reflects the spirit of generosity. He is not paid for the evening and each semester he gladly donates his time as well as copies of his novels and DVD to the students.

This is not a publicity stunt or a way to promote his next film project. This is also not a lecture. Shadyac is not going through each and every topic in his book, but letting the students come to him with questions, their opinions, and their perspective.

An array of topics were discussed: energy of the human spirit, the meaning behind a René Descartes’s quote, “I think therefore I am,” insight on self-happiness, the good and bad in the world, death, utopian society, materialism and wealth, evolving intelligence in the human species, where the world is heading towards, population growth and globalization, the idea of judgment, and fear.

These were not topics that Shadyac picked, but rather questions and thoughts that students and the Santa Monica College community had for him.

These were topics that he welcomed and provided his insight on while asking for the audience’s opinion in return.

The idea that this generation does not care is not accurate statement for this audience.

Whether the student or audience member agrees with Shadyac’s outlook towards life and life’s issues was not the focus.

The focus was to have a conversation about such topics in order to be more knowledgeable about the world that surrounds each person. This goal was thoroughly achieved.

This was further affirmed when a student rose from his seat to ask Shadyac a question.  He looks directly and confidently towards Shadyac and begins his question with, “Good Evening Professor Shadyac.”

Shadyac quickly dismisses the title professor as he is not a teacher. The student replies, “Yes.  Yes, you are. You taught everyone in this room.”