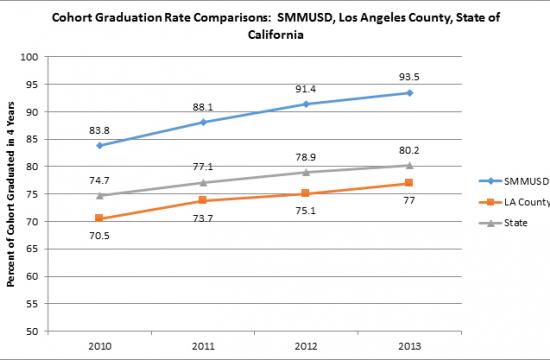 The California Department of Education has released new graduation rate data for the Class of 2013. The rate for SMMUSD’s Class of 2013 climbed to a remarkable 93.5 percent.

As shown in the chart above, this increase over the 2012 rate of 91.4 percent outpaced gains at both the state and county level.

SMMUSD Superintendent Sandra Lyon commented, “These increases reflect the collaborative effort of the entire SMMUSD community – students, teachers, administrators, and parents – as we work to prepare every student for college and careers.”

The four-year adjusted cohort methodology takes into account all students from the Class of 2013 who could have potentially graduated from our schools during a 4-year time period.

This includes students who entered 9th grade, as well as students who transferred into the district as 10th, 11th, or 12th graders.

In addition to an overall increase, numerically significant groups of students demonstrated gains over the Class of 2012.

In particular, African American students, Latinos, students with disabilities, and socio-economically disadvantaged student groups from the Class of 2013 graduated at significantly higher rates than the year prior.

“The gains for nearly all groups are quite positive,” Dr. Deloria said. “We will have to do further analysis of our English learners in order to determine what may have contributed to the one-year decline for that particular group of students.”

As shown below, both Malibu High and Santa Monica High demonstrated gains in graduation rate for the Class of 2013.

Malibu’s graduation rate now stands at a phenomenal 97.2 percent, with Santa Monica High, coming in close behind at 96.5 percent.

A separate graduation rate is not officially configured for Olympic High School.

The dropout rate is the rate of students that leave the 9-12 school system without a high school diploma, GED, or special education certificate of completion.

The dropout rate for the district now stands at 1.1 percent.

The table below compares dropout rates for SMMUSD, the county, and state over the past four years.

Note that for 2010 and 2011, the posted rates could be partially attributed to “lost transfers” as districts across the state struggled to upload and maintain accurate data in the California Longitudinal Pupil Achievement Data System (CALPADS).

Samohi’s graduation rates by numerically significant groups are shown below.

The most dramatic gain in grad rate was for students with disabilities, with a 12.1 percentage point increase over 2012.

Upon reviewing the data, Principal Eva Mayoral commented, “Samohi students and staff commit themselves to excellence on a daily basis.  It is phenomenal to see that investment pay off in such a profound way.”